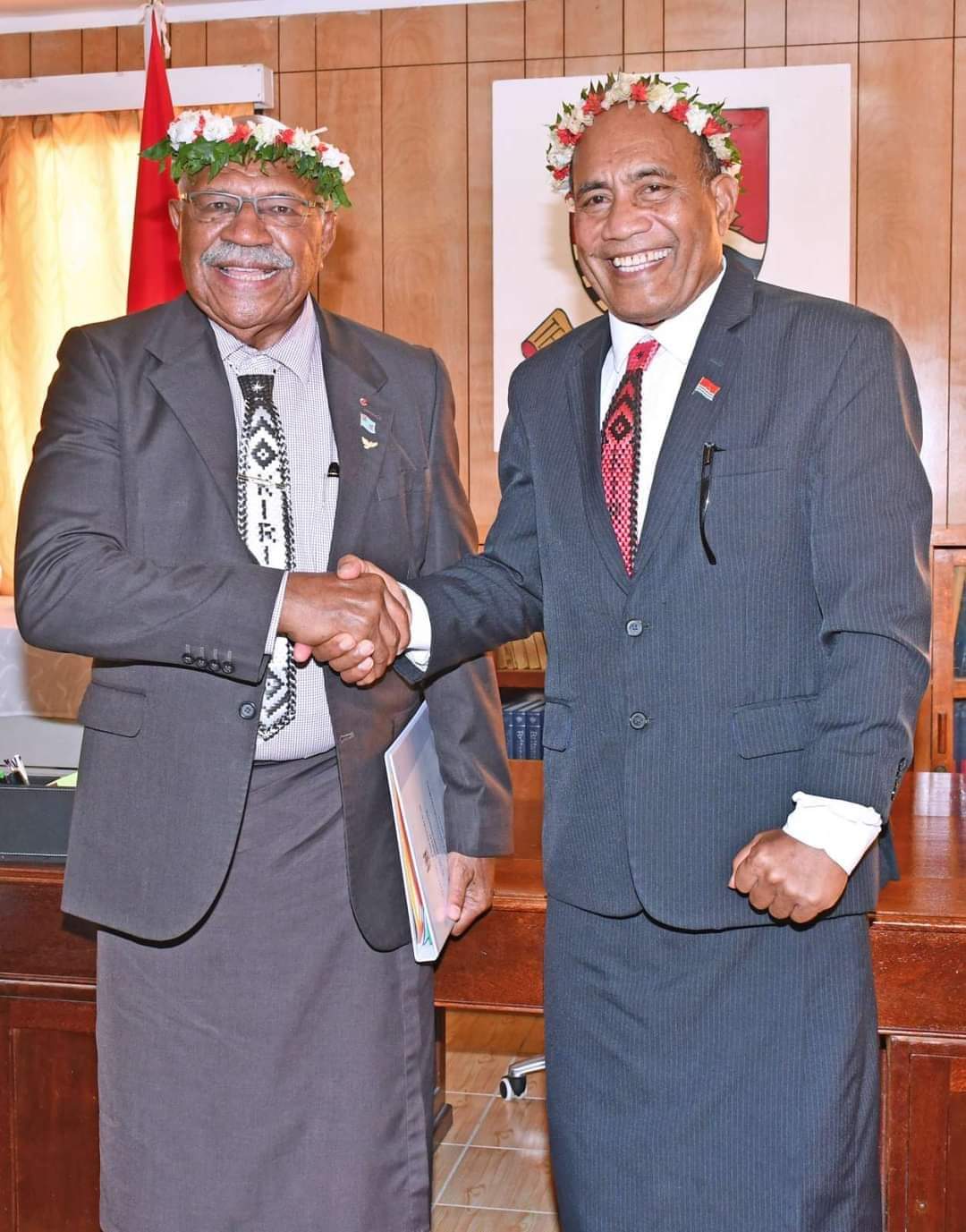 Six months away from handing over the reins of the Pacific Islands Forum to Cook Islands, Fiji’s Prime Minister, Sitiveni Rabuka is confident he’s repaired relations with Kiribati – following what he described a ‘very successful’ State Visit to the Pacific nation.

On Friday, Prime Minister Rabuka led a high-level delegation on a State Visit to Tarawa for bilateral discussion – and key on the agenda of the meeting was Kiribati’s membership of the Pacific Islands Forum.

Kiribati’s withdrawal from the Pacific Islands Forum (PIF) in July last year fractured regional unity and solidarity – after President Taneti Maamau refused to attend the annual Leaders gathering in Suva due to what he claimed was failure by PIF to address concerns of equity, equality and inclusiveness in a number of key decisions including the appointment of the current Secretary General.

Before the bilateral meeting at the Office of the President in Bairiki, the Fijian Government delegation led by Prime Minister Sitiveni Rabuka performed an age old traditional practice of ‘boka’ to President Taneti Maamau and his people to seek for forgiveness for the ‘wrongs of the past’ and to commit the Fijian Government to kinship and solidarity.

The Fijian leader said the ceremony symbolised the Pacific Way of resolving regional differences amongst members.

“It is the Pacific Way. When we deviate and adopt other ways of thinking that are not regional, we tend to easily offend one another. But when we think alike, like the Pacific Way, it’ so easy to repair the damage that perhaps would lead us astray from the Forum. It was significant and that is why I preferred to have the Fijian ceremonies of the ‘boka’ and ‘sevusevu’ and the apology, Rabuka told PACNEWS in Tarawa.

In the Fijian traditional context, ‘boka’ is presented by close relatives to acknowledge deep and sincere regret for not being present during a person’s death and the period of mourning.

The ‘boka’ gives absent kinspersons an opportunity to explain and justify their failures to comply with kinship demands and expectations and to re-establish their identity with the group and make good socially eroded images pertaining to kin-group undertakings, according to an explanation provided by the Fiji Government.

The ceremony recognises deeply embedded relationship between the two nations which dates back 78 years ago, in December 1945, when the people of Banaba moved to Rabi in Cakaudrove in Fiji.

Accepting the apology, President Maamau commended Prime Minister Rabuka and his coalition government for taking a bold but humble step to restore the Pacific Way of trust, respect and understanding within the region.

“Kiribati has ‘truly felt’ the brotherly love that translates into the Pacific Way of acceptable, reconciliation, peace and unity.

“These values and principles have not only been the shared building blocks of our histories and cultures but will also be the pillars of the future that we aspire towards as a blue Pacific region. Without doubt the past has brought before us unprecedented challenges and Kiribati has been fortunate to have Fiji by its side as a strong development partner.”

Fiji, he said has always opened its doors to the people of Kiribati including students and working nationals.

He said PM Rabuka’s decision to consider Tarawa as his first international engagement ‘speaks volume of your quality as a prominent and humble Pacific leader.’

“Moreover your ability to leave your flock of 99 sheep and look for the one lost sheep who has left the group over a disorientation of shared principles and values, remarked President Maamau.

He said the bilateral discussion has strengthened co-operation between the two countries and peoples in various areas ranging from better solution to the management of upper air space, technical assistance with health, education and other important sectors and innovative ways to utilise land purchased by government in Fiji.