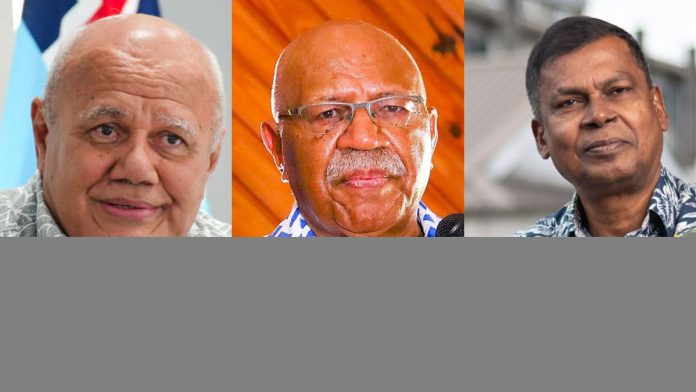 After 16 years of the FijiFirst Government rule in Fiji, the country will have a new Prime Minister who will lead a three party coalition.

Former Prime Minister and leader of the People’s Alliance Party (PAP), Sitiveni Rabuka is expected to be sworn in as the country’s sixth elected Prime Minister when Parliament convenes 14 days after the writ was returned to the President. It will be Rabuka’s second term in office. He first served as Prime Minister of Fiji from June 1992 to May 1999.

The PAP-National Federation Party (NFP) coalition was able to secure a majority of 29 of the 55 seats in Parliament, after the Social Democratic Liberal Party (SODELPA) declared its support on Tuesday evening.

SODELPA founded by the late former Prime Minister Laisenia Qarase emerged as the ‘kingmaker’ holding the balance of power on Sunday when the official result from Wednesday’s national election was announced.

Five other political parties – Unity Fiji, Fiji Labour Party. We Unite Fiji Party, All Peoples Party and New Generation Party failed to reach the threshold number of votes to be represented in the new Parliament.

After two days of negotiations, offers and counter proposals – SODELPA announced Tuesday evening that it was throwing its support behind the coalition of People’s Alliance (PA) and National Federation Party (NFP).

FijiFirst with its 26 Members of Parliament will join the Opposition benches when Parliament sits on Monday 01 January.

SODELPA stalwart and high chief, Ro Teimumu Kepa told journalists at the Yue Lae hotel in Suva that it was a ‘close and difficult’ decision for the Party’s Management Board.

“It has not been an easy 72 hours for the Party’s Management Board. We convened three board meetings which clearly indicates the gravity of the situation. It was a very close vote of 16-14 in favour of the PPA/NFP coalition, said Ro Teimumu.

She said the main contributing factor to arriving at the decision was the ‘stability of the nation’ particularly the concerns people have been raising for the past 16 years.

In addition, SODELPA has been assured the new coalition government will look at repealing the 32 laws deemed discriminatory to the indigenous I-Taukei people in Fiji.

In his first appearance to the local and international media on Tuesday night after the SODELPA support, Rabuka and NFP Leader, Professor Biman Prasad, both thanked the outgoing Prime Minister Voreqe Bainimarama and his cabinet for running the affairs of the country for the last 16 years.

Both the coalition leaders acknowledged ‘this is a new era for change’ in Fiji.

“We are pleased to give the people of Fiji a Christmas gift – a strong and united coalition government, ready to bring change, said Professor Biman.

Both leaders thanked the people of Fiji for voting for change.

“An official communication will be sent to His Excellency the President that we have a ‘workable coalition’ and ready form the new government under our new Prime Minister, Sitiveni Rabuka, Professor Biman announced to journalists.

According to Section 67 (1) of the 2013 Constitution, the President will summon Parliament no later than 14 days after the announcement of the results of the general election. Fiji’s Parliament is expected to be convened on 01 January 2023.

The SODELPA General Secretary is claiming that bribery took place today as SODELPA joined the People’s Alliance and the National Federation Party to form the next government.

It’s believed that Duru will lodge an official complaint with the police.