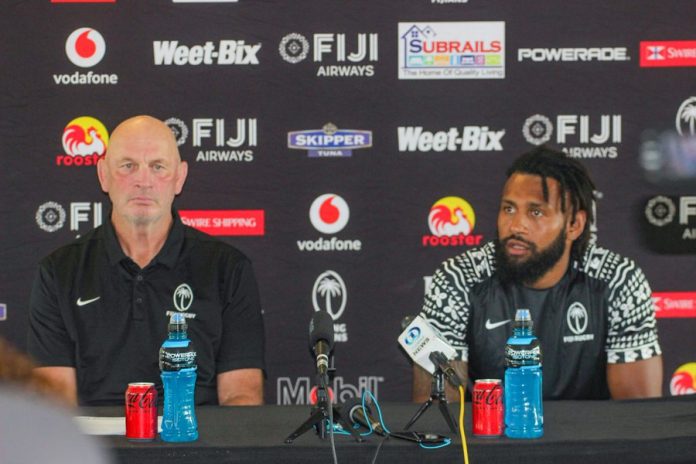 Flying Fijians Head Coach Vern Cotter has named three debutants in the 23-member team which kicks off their Autumn Nations Cup campaign against Scotland on Sunday.

Ratu Leone Rotuisolia, who missed the opportunity while in camp during the mid-year internationals, has finally made his cut into the run-on team.

Former Fijian 7s and Olympic Games Gold Medalist, Sireli Maqala and Livai Natave are expected to earn their first cap off the bench.

Cotter said Maqala has been impressive during training and gives them a number of options to play in the backline.

“He has impressed us with his skill sets. He can kick well, with the ball he is strong and tough and he offers us a number of positions as he can play at number 10, 15, and at the center” said Cotter.

Albert Tuisue will be at the blindside flank while in an interesting move, Levani Botia will strengthen the forward pack from the openside flanks position. Viliame Mata returns from injury and starts at number eight.

In the backs, Frank Lomani and Vilimoni Botitu will share the halves combination while Kalaveti Ravouvou and skipper Waisea Nayacalevu will control the play in the midfield. Vinaya Habosi is on the left wing and Setareki Tuicuvu is on right. Veteran fullback Kini Murimurivalu will control the play from number 15.

Tevita Ikanivere, Hareiti Hetet and Luke Tagi will provide firepower in the second half while Apisalome Ratuniyarawa and Kitione Kamikamica will come as replacements in the forwards. Teti Tela has made it into the squad after arriving at camp on Wednesday night and is on the bench with Peni Matawalu and Sireli Maqala.

Cotter said they have mapped out a game plan which the players need to follow in order to counter their opponents.

“We need to approach the game with a lot of humility. We are a tier 2 team playing a tier 1 team that had a game already in their bag.

We are slowly getting together but we want to get learnings from this plus we have the Rugby World Cup next year so it is really important that we put ourselves up against a very good team and I’m sure from we will come away with individual and collective improvements to be made” said Cotter.

He added that the Flying Fijians will stick to its Fijian flair of rugby but will add more structure to it when it comes to scrums and lineouts.

Flying Fijians take on Scotland at 1am on Sunday.