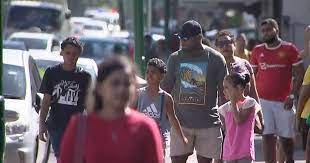 1News can reveal exclusive figures showing Pasifika make up half of all rejected visa applications.

The Government is adamant that it’s not the case.

“Immigration officers will assess individual applications and then make calls based on the evidence in front of them,” Immigration Minister Michael Wood said.

According to the numbers 1News has obtained, that evidence appears to overwhelmingly exclude Pacific communities.

From August to October, officials declined 1446 Visitor Visa applications from 68 countries, but more than half of those rejected were from just nine Pacific nations.

“The figures show that the system, the immigration system, is still very much biased against the Pacific people who come into the county,” University of Canterbury professor Steven Ratuva said.

Wood responded to these claims, saying: “I have not seen any evidence of bias.

Looking further into the data and comparing countries with similar levels of applications shows a stark difference. In Tonga, 1299 applications were approved, with Thailand having 1398 approved – only six were rejected from Thailand compared with more than 224 from Tonga.

“One of the key factors which is assessed is what’s called the bone fides which is effectively an assessment as to whether there’s an expectation that the person will keep within the confines of the Visitor Visa and return home at the end of that period,” Wood said.

“While that’s a universal criterion for anybody wanting to come to New Zealand it just appears to me that Pacific people are over represented in the rejection statistics,” Polynesian Panther Alec Toleafoa said.

He’s an original member of the Polynesian Panthers and questions New Zealand’s constant talk of its special relationship with the Pacific.

“The so-called special relationship that we have doesn’t seem to be reflected in these statistics,” Toleafoa said.

Ratuva argues the criteria should be more flexible.

“A lot of Pacific people who come in, who have families here, don’t need a lot of money,” he said.

“If this is the statistics that are being thrown up then we need to really think about what our relationship means with the Pacific,” Green MP Teanau Tuiono said.

These questions come at a time when that relationship is under significant scrutiny.