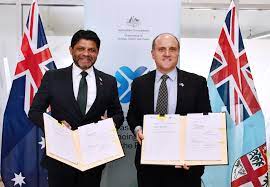 No governmental authority will interfere in the activities of the Multinational Observer Group (MOG) during the general election, states the MOG Terms of Reference (TOR) that was signed between the Fijian Government, India, Indonesia and Australia last week.

The TOR states the Fijian Government will seek the approval of the Fijian Elections Office to provide unimpeded access to the MOG to all stages of the election process.

“The Fijian Government will facilitate unimpeded access to the MOG to all persons concerned with election processes, including electoral officials at all levels subject to the approval of the FEO and members of the Fijian Government whose functions are relevant to organising genuine democratic elections.

“The Fijian Government will ensure freedom of movement around the country for all members of the MOG.

“The Fijian Government will ensure that no governmental authority will interfere in the activities of the MOG, or individuals or organisations that provide information to, or support for, the MOG, in accordance with the laws of the Republic of Fiji.”

Meanwhile, Members of the Multinational Observer Group (MOG) will need to be neutral at all times, states the MOG Code of Conduct, that was signed as part of the Terms of Reference (TOR) last week between the Fijian Government, India, Indonesia and Australia.

The TOR states the MOG must act in a strictly neutral and unbiased manner in relation to national authorities, including the electoral officials, political parties, candidates, voters and the media.

“Refrain from accepting any gifts from individuals or organisations.

“Refrain from any action likely to be interpreted as indicating partisan support for any candidate, political party or organisation.

“Exercise the highest level of personal discretion, at all times.

“Refrain from wearing or carrying party or independent candidate symbols.”.