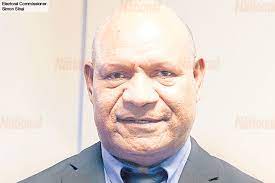 It will cost the Papua New Guinea Electoral Commission around K5 million (US$1.4 million to hold by-elections next year for the three seats left vacant, two by the deaths of MPs, says commissioner Simon Sinai.

He told The National that a budget proposal of not more K5 million (US$1.4 million) to run the by-elections for the three seats has already been submitted to the National Executive Council.

His office is awaiting its approval.

The three vacant seats are: Wewak Open (MP Kevin Isifu died on 13 September after being re-elected in the General Election 2022), North Bougainville (MP William Nakin died in July), and the Lagaiap Open seat in Enga which was declared “failed”.

Sinai said the by-elections would take place early next year.

On the Lagaiap seat, Sinai said during the General Election 2022 that he would look through the report from the election manager in Enga and the returning officer for Lagaiap before deciding on whether to declare a by-election.

Sinai stated because the life of the original writ for Lagaiap was dead or had passed the constitutionally mandated deadline, a new writ had to be issued.

For Wewak Open and North Bougainville, the MPs who won the seats had passed away.

Isifu died after he had been declared as the winner.