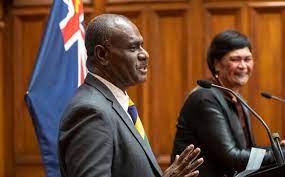 Solomon Islands foreign minister Jeremiah Manele said veiled references to China in an American-led Pacific declaration were one of the reasons his country was reluctant to sign up to the deal at first.

Solomon Islands signalled it would not sign the 11-point declaration between the United States and Pacific Island nations, a blow to Washington which had hoped to bring Pacific nations onside in the face of China’s interest in the region.

On a visit to Wellington today, Manele said his country’s initial objections had been that the original draft of the declaration included references his country was unhappy with. He went on to confirm these were references suggesting Pacific nations would need to “pick a side” in the geopolitical conflict between China and the United States.

“In the initial draft there were some references that we were not comfortable with,” Manele said.

When asked whether these references were to China specifically, Manele responded, “indirectly”.

Manele said Solomon Islands had wanted the declaration to reflect its vision of a peaceful and collaborative Pacific.
He added that discussions and negotiations held by officials were able to find “common ground”.

He said these concerns were “accommodated” in the draft before it was signed.

The declaration is the cornerstone of the United States’ recent re-engagement with the Pacific and culminated with Pacific leaders being welcomed to the White House last week in what the Washington Post called a “first of its kind” meeting.

Earlier this year, Solomon Islands signed a security pact with China – much to the ire of New Zealand, Australia and the United States who saw it as an unwelcome potential militarisation of the region.

Manele reiterated the Solomon Islands’ position that China was not allowed to build a military base on its territory.

Concerns about the militarisation of the Pacific stepped up a notch on Tuesday after North Korea reportedly fired a missile over Japan into the Pacific.

The action was criticised by Manele and Foreign Minister Nanaia Mahuta.

“New Zealand has been a long-advocate for the non-proliferation of nuclear weapons and our stance has been well articulated over a number of years. It is concerning,” Mahuta said.

Manele added: “We share the same position that the minister has alluded to. It is a concern and one that we condemn.”

The Japanese prime minister’s office said at least one missile fired from North Korea flew over Japan and was believed to have landed in the Pacific Ocean.

It said authorities issued an alert to residents in northeastern regions to evacuate buildings nearby in what was reportedly the first such alert in five years.

Ardern, speaking to media during a visit to the Auckland Film Studios in West Auckland, said it was important to condemn North Korea’s increasing testing and use of ballistic missiles.

“It is a breach of international rules, it’s a breach of that sense of security for the [Pacific] region, so we stand with others in giving our condemnation.”

She urged other nations to work co-operatively to reduce what she deemed a “significant threat” to Japan, given North Korea’s ongoing use of the weapons.

“[Japan] continues to have our solidarity, but we’ve got to continue to work together as an international community to demonstrate that this is just totally unacceptable in law and in practice,” she said.

Honiara as the smoke subsides