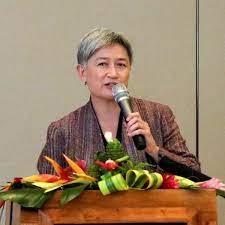 The foreign affairs minister, Penny Wong, says Australian aid in the Pacific comes with “no strings attached”, in a veiled reference to China’s expanding power in the region.

Visiting Port Moresby on Monday, Wong said Australia wanted the “closest possible relationship” with Papua New Guinea and would work with, and listen to, its government and people.

The Australian foreign minister is set to take a similar message to Timor-Leste when she flies there on Wednesday.

China is striking a range of deals in the Pacific and, in some cases, is offering large loans for infrastructure.

Countries are now using China to “leverage” Australia, Michael Leach, a professor in politics and international relations at Swinburne University of Technology and founder of the Timor-Leste Studies Association, said.

A permanent shift in power relations means smaller countries can “play the China card”, he said.

“It is a thorny problem. China certainly provides smaller nations in our region with negotiating power and leverage with traditional partners they didn’t previously have.”

Timor-Leste’s president, José Ramos-Horta, wants a crucial gas pipeline to connect reserves in the Timor Sea to his own country rather than Darwin and warned his nation will look for Chinese support if Australia and Woodside Energy do not back that plan.

The Solomon Islands prime minister, Manasseh Sogavare, has said that Australia is his security partner of choice, but that he would call on China for help if there was a “gap”.

China has been consolidating its power in the Indo-Pacific while Australia is trying to restore its influence in the region.

Leach said Australia had “let its game drop” in the region – including in Timor-Leste, since revelations Australia had spied on its government during negotiations over access to resources.

Dr Meg Keen, the new director of the Lowy Institute’s Pacific Islands programme, said what the leaders were saying was that, while Australia is the security partner of choice, it wasn’t a “zero sum game”.

“We are looking for options because we have huge needs. China is an option,” she said, from the leaders’ perspective.

Australia cannot hope to compete with China’s largesse so “we have to be smarter about how we use our finances”.

“We have to do what we do better and sell what we sell better. We can’t be there for everything, we can’t play whack-a-mole.

“We have to really show that we’re willing to set up that platform for dialogue with the Pacific. We have long historical ties, deep economic ties, and understanding of culture, and a multi-faceted capacity to engage. Those are worth something in this region.”

Businessman Ian Gowrie-Smith is selling 21 islands – known as the Conflict Islands – in PNG waters and says he will reluctantly sell to Chinese buyers if Australia isn’t interested.

Jeffrey Wall, who has worked with PNG ministers including a prime minister, says Australia needs to keep an eye on Beijing’s moves. He said the Conflict Islands were “absolutely critical”. If China bought them it could cut off the main sea channel between Australia and the world, he said.

The island deal would be a private sale, so Australia has said it would be inappropriate to intervene.

In a press conference on Monday with her PNG counterpart, Justin Tkatchenko, Wong said Australia was a partner that “seeks to work with you” and “to listen to the new government and the people”.

She was scheduled to meet with prime minister James Marape, who has just been re-elected, later in the day.

On Wednesday, Wong will travel to Timor-Leste to meet with Ramos-Horta and the prime minister, Taur Matan Ruak.

Wong said the trip as a whole was “to renew and strengthen Australia’s ties with two of our nearest neighbours.