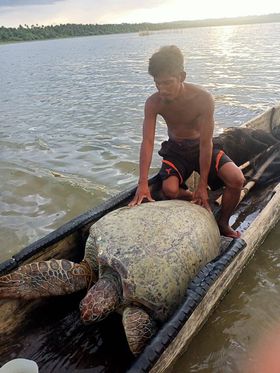 Sixteen years later since being tagged in 2006, an adult female green turtle tagged in the Federated States of Micronesia as part of the Secretariat of the Pacific Regional Environment Programme’s (SPREP) turtle conservation programme, has been resighted in the Philippines.

The turtle was caught alive in fishing nets by local fishermen off the coast of Sulat Eastern Samar, Philippines. This has been the first resighting reported back to SPREP since it was tagged after it had come up to nest in 2006. Local residents took photos of the turtle and her tags before releasing her back into the ocean to continue her journey.

“We’re very excited to have received this resighting report of the turtle some 3000km away from where it was tagged 16 years ago,” said Juney Ward, Ecosystem and Biodiversity Officer for SPREP.

“It’s amazing to know she is still happily swimming in our waters 16 years after we tagged her. We’re grateful the local fisherman took note of the tags and released her. The resighting reaffirms our efforts in turtle conservation in the Pacific region – I encourage others to report any sightings should they come across tagged turtles.”

The green turtle is one of the larger sea turtles, they are unique in that they are herbivores and consume mostly seagrass and algae. This diet gives their bodies a green colour for which they are named for. They are known for migrating long distances between feeding grounds and the beaches where they nest. They lay their eggs on land and are solitary, night-time nesters.

Listed as endangered on the IUCN Red List of Threatened Species, green turtles face several threats including overharvesting of their eggs, pollution, loss of habitat and nesting sites, accidental capture in fishing gear and climate change.

Monitoring tools such as tagging is important for turtle conservation. Tags with unique numbers are attached to their flippers which allows for future identification when caught or resighted. Tagging also ensures monitoring of individuals over time to understand growth and age to maturity. It also provides important information on their migration patterns and studying regional connectivity.

SPREP Threatened and Migratory Species Adviser, Karen Baird notes “tags are only useful if they are recorded in a database for future retrieval of information such as this case and we commend the local fishermen for reporting the tags to SPREP and ensuring its safe release back into the ocean”.

SPREP’s Turtle Research and Monitoring Database System or better known as TREDS, can be used to collate tagging data and other information such as, nesting, beach surveys and other biological data.

TREDS was established in 1993 soon after SPREP created its Regional Marine Turtle Conservation Programme in 1990. Since its inception, TREDS has helped demonstrate regional collaboration in sea turtle conservation, providing evidence that some countries share the same turtle populations.

The database is now a web-based platform, with increased data capability and easily accessible to more people globally.

In addition to monitoring tools, public awareness is of paramount importance in species conservation. Finding the tag and reporting it as done by the local fishermen in the Philippines should be encouraged as good practice for anyone who finds a turtle, so authorities can update its movements as well as observe its migration.

Samoa Conservation Society President, James Atherton commends SPREP’s response, “SPREP colleagues were able to check the turtle database and found out the story behind the turtle”.

The public working together with conservation authorities is important in ensuring information on turtles and their movements are reported and recorded accurately.

Coastal development activities and rising sea levels are leading to the loss of turtle habitat and nesting sites. Activities such as reclamation of coastal areas, sand mining, and removal of coastal flora can result in loss of dry land suitable for turtle nesting. Oil spills and marine plastics also threaten turtle populations. Accidental capture in fishing gear not only occurs in the Pacific but is a worldwide problem.

Awareness of the threats against green turtles and active participation in their conservation is crucial in protecting their populations and habitats.

If you or your community come across a turtle, we encourage you check to see if it is tagged on one or both flippers, and report them to your nearest conservation agency before releasing it safely back into the ocean.

Pacific nations are extraordinarily rich in critical minerals. But mining them may take a terrible toll

Morrison left out on Pacific rim over climate diplomacy