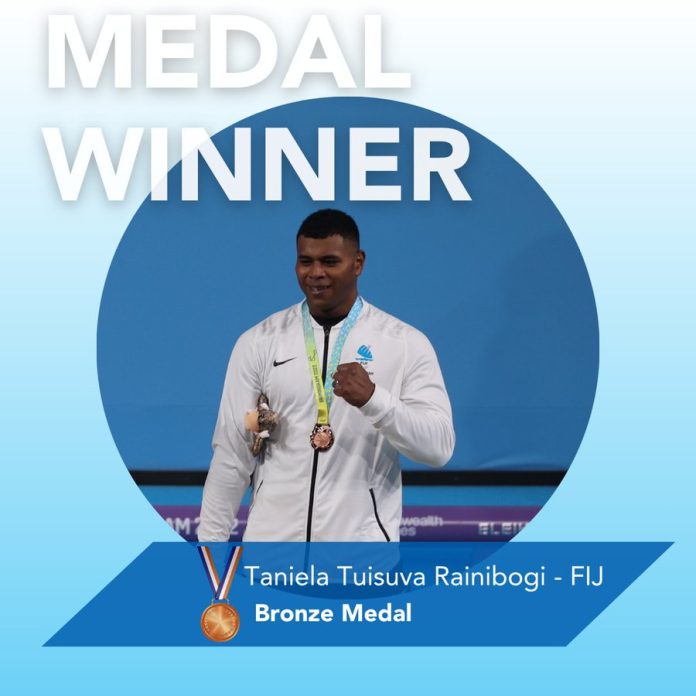 Fiji weightlifter Taniela Rainibogi bagged a bronze medal for Fiji in the Mens 96kg final at the Commonwealth Games in Birmingham.

In first place was Don Opeloge of Samoa who lifted 171 kg in the snatch and 210kg in the clean and jerk. This was a Commonwealth Games record.

In second place is Vikas Thakur of India who lifted 155 kg in the snatch and 191 kg in the clean and jerk to lift a total of 346 kg.

In her repechage match, Takayawa lost to Joy Asonye of Nigeria.

In swimming, Hansel McCaig secured first place in the Mens 50 metres freestyle heats with a time of 23.29 seconds.

Cheyanne Rova secured second place in the womens 50 metres backstroke heats with a time of 32.34 seconds.

Meanwhile, Pacific Sprint King Ratu Banuve Tabakaucoro finished fifth in heat one of the 100m race at the Commonwealth Games in Birmingham.

Tabakaucoro finished with a time of 10.64 seconds.

He has missed out on the top two spots that has been taken by Nigeria and England to the next round.

Nigeria’s Favour Ashe finished first with a time of 10.12 while Mitchell Blake of England came in second clocking a time of 10.14s.