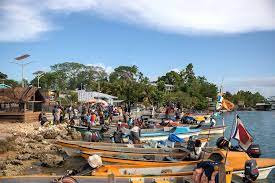 A Chinese state-owned company is negotiating to buy a deep-water port and World War II airstrip in Solomon Islands, as new documents detail how money from Beijing has helped keep the Pacific nation’s controversial leader in power.

As a battle for influence plays out in the region, an investigation by Four Corners has found China is aggressively pursuing economic opportunities across the Solomons to boost Beijing’s strategic interests.

One asset being targeted by China is a hardwood forestry plantation on the island of Kolombangara, which features a protected harbour, deep-water port and an airstrip.

A delegation from the state-owned China Forestry Group Corporation visited the island in 2019 and, according to those present, showed little interest in the trees. Instead, one member of the group pointedly asked: “how long is the wharf and how deep is the water?”.

Silas Tausinga, a Solomon Islands MP whose electorate sits next to Kolombangara, believes China’s ambition to house military assets in his country remains strong, despite months of high-level political and media attention.

“Absolutely, Australia should be worried about it,” he told Four Corners.

This push is only possible because the Solomons severed diplomatic ties with Taiwan in favour of Beijing in 2019.

Since then, China has mobilised funds to support the country’s combative Prime Minister, Manasseh Sogavare.

One letter signed by Sogavare said the Chinese Embassy in Honiara “consented” to provide “additional support” for his government in August last year.

That was in the lead up to a vote of no confidence, which could have toppled the Prime Minister and undermined Beijing’s ambitions in the tiny Pacific nation.

Sogavare described the money as a “stimulus package” to revitalise the economy, although it was only given to MPs loyal to him. Opposition members received nothing.

“This is corruption,” said Ruth Liloqula, the head of Transparency International in Solomon Islands.

“China is keeping this government together. We all assume that China is remotely controlling the government and Solomon Islands affairs.”

Weeks after riots erupted in the capital, and still fearing for the survival of his government, Sogavare again activated the Chinese slush fund.

The list of MPs paid in that round was almost identical to the one four months earlier, except the name of the one MP who left the government was crossed out.

Two pages printed with a list of 39 names, their constituencies, and a dollar amount. Two names have been crossed out.

A document showing the MPs who received the second round of payments in Solomon Island dollars.

The only other name crossed out was an MP who had recently died.

Silas Tausinga confirmed that he received the first payment when he was part of the government, but not the second one after crossing the floor to join the opposition.

“I wasn’t going to stay for the money,” Tausinga said.

All MPs loyal to the Prime Minister received nearly $80,000(US$9.743) each. Liloqula said those MPs have no obligation to show how the money was spent.
Asked if the Chinese money allowed Sogavare to retain his job, Tausinga said, “Well, he’s stayed in power, hasn’t he?”

The Prime Minister survived the no confidence motion on 06 December.

During the 36-year period when the Solomons recognised Taiwan, the prime minister of the day had a similar slush fund at his disposal. But there was also a much larger pool of money distributed to all MPs.

Four Corners emailed detailed questions about these allegations to the Prime Minister’s office and followed up with phone calls and texts. We received no response.

Beijing’s desire for a military presence in the Solomons was revealed in a recently leaked letter from 2020, in which a Chinese defence contractor sought to lease land in Isabel Province to develop “naval and infrastructure projects” for the “People’s Liberation Army Navy”.

Sogavare has assured Australian Prime Minister Anthony Albanese that China won’t be allowed to build a military base in the Solomons. But despite a friendly meeting between the pair at the recent Pacific Islands Forum, suspicion remains about China’s intentions.

Clive Moore, a Pacific expert from the University of Queensland, said in the longer-term China could use its economic outposts in the Solomons for military purposes.

“I think we have to look with new eyes at the way that bases can be developed for Chinese interests in the Pacific,” he said.

“China has interest in minerals, it has interest in timber. They are interested in developing situations where in the future they may be able to be used for other purposes.”

The forestry plantation on Kolombangara offers both economic and strategic opportunities.

If a Chinese entity took over the plantation it would control two-thirds of the island, including 14,000 hectares of hardwood forest, 24,000 hectares of protected forest, the port, a marine base, the airstrip and large areas of flat land.

“With a large Chinese corporation, you can be quite certain that they are acting with a great deal of advice from the Chinese central government. Whether that investment is in logging or in mining… there is a connection,” Clive Moore said.

In late May, as talks with China Forestry Group Corporation continued, members of the plantation company’s board, Kolombangara Forests Products Ltd (KFPL), wrote to Foreign Minister Penny Wong about the “risks/strategic threats” it posed to Australia.

It urged the Australian government to provide financial assistance to “prevent China taking control of the port and airstrip areas and establishing a base that can easily be done under the cover of commercial development”.

The letter said Kolombangara has “the best natural deep-water port in the Solomons that could be used for a large vessel immediately”.

The Foreign Minister was told in the letter that any Australian government funding would provide an opportunity for the two countries to forge closer economic ties around sustainable development and logging in the Pacific.

The plantation is owned by private Taiwanese and Australian shareholders, in conjunction with the Solomon Islands government. The letter said the Solomons government had approached the board about the deal with China Forestry Group Corporation.

Australia’s Department of Foreign Affairs wrote back to the board members on Friday and said it would not be intervening.

When asked how worried he was about a Chinese buyer coming in, KFPL general manager Edwin Schramm said there was some concern on the island.

“Local people don’t see that as generally a positive move… and they would like to see the existing shareholders, particularly the Solomon Islands government, maintain a strong presence on the island,” he said.

Kolombangara sits across from the provincial and economic centre of Noro, home to the country’s tuna fleet.

In the nearby town of Munda, China is relaying the airport tarmac and building a new international terminal.

China has made no secret of its ambitions in the country’s west. In June, Ambassador Li Ming donated fishing boats, eskys and engines to locals on Marovo Island.

For its part, Australia has agreed to fund early planning and design work to upgrade the international container port at Noro with money from the Solomon Islands Infrastructure Programme.

Canberra is also funding the construction of six mobile phone towers across the country, in an effort to plug gaps in the network.

It’s an area where the Solomons has once again turned to China.

Chinese tech giant Huawei, which has been banned from building new networks in Australia and the U.S, is pushing to construct around 160 mobile phone towers across the Solomons.

Under the current plan, the towers would be funded through a US$55 million loan from China with the remaining U$16 million coming from the Solomons government.

Four Corners has obtained a report that casts serious doubt over the project’s financial viability and construction timeline, while others question the need for so many towers.

The report from consulting firm KPMG said the project’s 2financial forecasts are optimistic” and the operator of the towers would need to inject US$156 million of cash into the project over 20 years.

Experts have questioned whether the country could ever repay the debt, while others fear the deal could even bankrupt Solomon Telekom if it was forced to pay for the towers.

“It concerns me because it is in who’s interest?” Liloqula said.

“Is it [being] built for Solomon Islands or is it built for China’s interest?” she said.