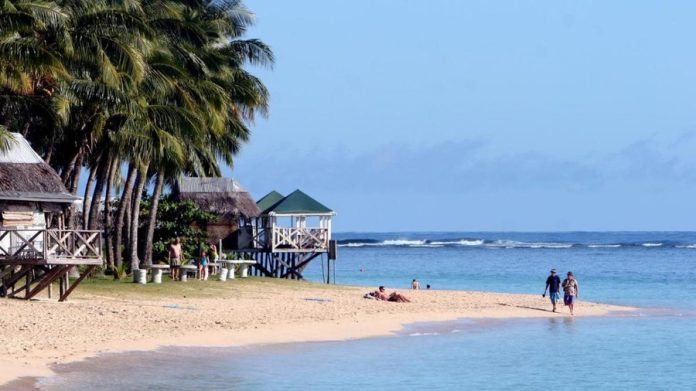 Samoa reopen to international tourists again on Monday, 865 days after closing borders due to COVID-19.

For Western Australian Tuitaga Nathan Bucknall, the manager of the Taumeasina Island Resort near Apia, it’s day that’s been a long time coming.

“We were the first to close and the last to open,” he told AAP.

It seems many agree, with the limited number of flights heading to Apia’s international airports running close to capacity for weeks to come.

New Zealand is the biggest tourist market for Samoa, but there’s not a single seat availabile on one of Air New Zealand’s four weekly flights until August 23, with a one-way ticket starting at the pricely sum of NZ$1,083 (US$682).

Australians looking to head to the Pacific paradise will also need to pay through the nose on Qantas, or via Fiji.

The first flights may be full to the brim, but they’re not bringing tourists, according to Mr Bucknall, an Apia local for seven years.

The Pacific nation has around 200,000 residents, but a huge diaspora overseas.

Estimates suggest there are as many Samoans living in both the United States and New Zealand as Samoa itself, with another 100,000 in Australia.

The first flight to land at Faleolo International Airport will be a New Zealand Defence Force Boeing, carrying Kiwi Prime Minister Jacinda Ardern and an entourage of politicians, staff, community leaders and media.

The New Zealand delegation is making a two-day trip on the invitation of Prime Minister Fiame Naomi Mata’afa, celebrating 60 years of Samoan independence.

And Bucknall has scored the visiting prime minister as a prestige guest – kicking off the resort’s reopening in style.

He is hoping Ardern won’t notice any faded furniture or sluggish service as the hotel operation ramps back up.

“She’s a little bit tired after two years of being almost shut down,” he said of his hotel.

“We traded through, changing it all up for domestic tourists.

“To do that, we decreased our rate, but we also decreased our staffing and the offering. We had to find a way to keep paying the bills to keep 50 percent of our staff in work.”

Samoa Tourism is also whirring back into life, with a new advertising campaign fronted by NRL star turned social media sensation Johnny Tuivasa-Sheck, with the slogan “Beautiful is Back”.

Prior to the pandemic, tourism increased to contribute roughly a quarter of Samoa’s GDP.

Samoa isn’t quite the last Pacific nation to pull up the drawbridge, but it is following Fiji, French Polynesia, New Caledonia and Cook Islands – all competition for the tourist dollar.

“After two years and five months of border restrictions we are delighted to be welcoming our guests back into Samoa!” he said.

Bucknall said the public mood had shifted from anxiety at the threat of COVID-19.

“I don’t think there’s a lot of discontent … the vaccine rollout has been excellent, we’re up over 98 per cent double-vaxxed,” he said.

Half of Tonga’s tourism businesses ‘won’t return’ after tsunami, lockdown