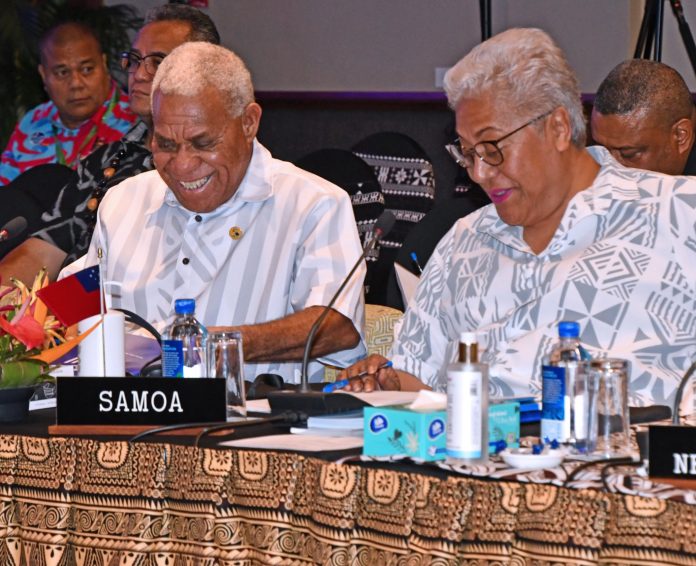 Climate-threatened Pacific islands are pushing for the International Court of Justice to throw its weight behind efforts to arrest climate change, with the initiative gaining support at a key regional summit in Fiji Wednesday.

The Pacific nation of Vanuatu is spearheading a campaign to ask The Hague-based tribunal “to protect the rights of present and future generations against the effects of climate change”.

Vanuatu’s Foreign Minister Marc Ati told AFP on Wednesday that he was confident leaders from neighbouring islands, including Australia and New Zealand, would endorse the push at this week’s Pacific Islands Forum in the Fijian capital Suva.

The plan will need the backing of a majority of countries at the United Nations General Assembly in September to be put to the world’s highest court.

Support from the countries meeting at this week’s Fiji summit could be crucial to get the UN vote across the line.

Ati said he had “met with all my counterparts, they confirmed their support”

The initiative began in a classroom at the University of the South Pacific in 2019.

Some 27 law students wrote to Pacific leaders asking them to take up the campaign — and Vanuatu answered the call.

Fijian university student Vishal Prasad, 26, was one of those involved.

He told AFP that even a non-binding “advisory opinion” from the International Court of Justice would have “wide-reaching impacts”.

Prasad hopes the court weighing in would spur more ambitious actions on climate change, and put polluters on notice that they will be held accountable.

For young people in the Pacific, “the existential threat, the reality” of climate change “is quite scary”, he said.

Rising sea levels and stronger storms are already causing serious problems across the Pacific, where many communities live just above sea level.

“We are already seeing impacts on a daily basis. We are seeing the onset of cyclones,” said Prasad. “We are seeing communities being relocated.”

Pacific leaders will discuss Vanuatu’s campaign during the summit’s final meeting Thursday — alongside other key issues for the region including climate and security.

The Pacific summit marks the first time leaders have been able to meet in person since Covid-19 hit, forcing countries across the region to close their borders.

“Tuvalu fully supports that initiative by Vanuatu,” he told AFP.

One country whose position is being closely watched this week is Australia, a major emitter in the region and one of the world’s top fossil fuel exporters.

Prime Minister Anthony Albanese arrived Wednesday in Suva for his first visit to the Pacific as leader, hoping to mend Australia’s fractured relationship with the Pacific after a near-decade at odds on climate policy.

Albanese said he supported “the broad concept” of Vanuatu’s campaign but wanted to see the details of the reference.

“It’s hard for any nation to just sign off sight unseen,” he said.

“But with regard to the general principle, we understand that it is a reasonable principle being put forward.”

Pacific expert Wesley Morgan of the Climate Council said there is still a “robust discussion” about the exact question that would be put to the International Court of Justice.

He said the new Australian government has “its work cut out for it to convince island countries that it is actually serious about tackling climate change”.

The question is “how much skin is Australia prepared to lose” he said.

By the end of the summit “we will find out whether or not Australia has tried to change the language of the question that they would prefer to take to the ICJ” he added.