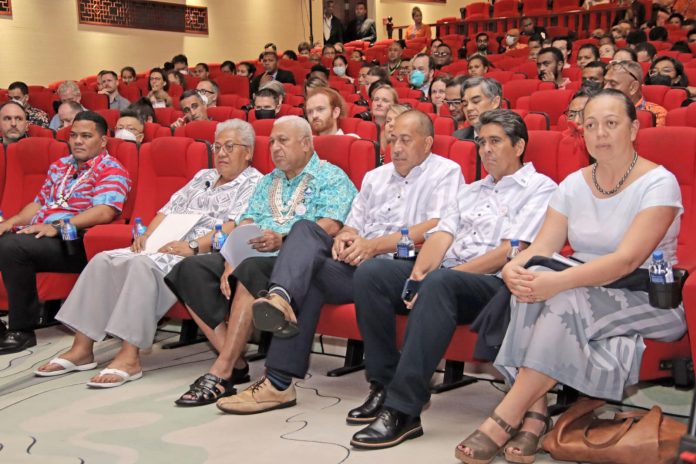 Pacific island leaders welcomed a pledge by the United States to triple aid to the region to combat illegal fishing, enhance maritime security and tackle climate change, after decades of stagnant U.S funding.

U.S. Vice President Kamala Harris, in a video address to the Pacific Islands Forum in Suva on Wednesday, said U.S funding for Pacific islands would be tripled to $60 million a year for a decade, subject to approval by Congress.

Some Pacific leaders are seeking to balance China’s ambitions for trade and security ties in the region. The Solomon Islands has struck a security pact with China that has prompted concern from the United States and its allies.

Harris called for nations to “stand united” as bad actors seek to undermine the international rules-based order, without naming them.

“We recognise that in recent years that Pacific islands may not have received the diplomatic attention and support that you deserved,” she said.

Pacific leaders gathering for the four-day Forum see climate change as the region’s major security issue, but tensions between China and the United States, and the surprise withdrawal of Kiribati from the forum, are also being discussed.

“It really shows the U.S are back and want to play an active role,” said Palau President Surangel Whipps Jr after Harris’s speech.

“Sometimes because of our remoteness we get forgotten, so this was important,” he told Reuters.

The forum will discuss a bid by China to sign a trade and security agreement with 10 nations that have ties to China, that is opposed by some members.

Palau, which has a defence relationship with the United States and diplomatic ties with Taiwan, was among PIF members excluded from the proposed China deal, but China was economically active in the nation, said Whipps Jr.

2The sky is the limit with the opportunity with China. That competition creates, sometimes, concerns about security. We lived through World War Two and we don’t want to see that again,” he said.

The United States is concluding negotiations on a renewed fishing treaty with Pacific island nations that has allowed U.S. vessels to fish in exclusive economic zones for decades, and is offering greater support for maritime surveillance in the Pacific.

Australia’s Prime Minister Anthony Albanese said it was important the United States was increasing support, including new embassies in Kiribati and Tonga.

“We very much welcome the Biden administration’s increased presence in the region,” he said, adding strategic competition was a backdrop to the conference.

Albanese said defence personnel would work together on the project that would create local jobs, protect local fishing industries and was “important for our security partnership”.

Palau’s fisheries minister, Steven Victor, said tourism and fisheries were the nation’s only revenue sources, and U.S funding had remained stagnant for 20 years.

Kiribati, also reliant on fishing, struck fisheries deals with China after switching diplomatic ties from Taiwan to Beijing in 2019, a month after the forum last met in person.

A Chinese foreign ministry spokesperson told a news briefing on Monday that “China has enjoyed good cooperation with the Pacific Island Forum for many years.”.