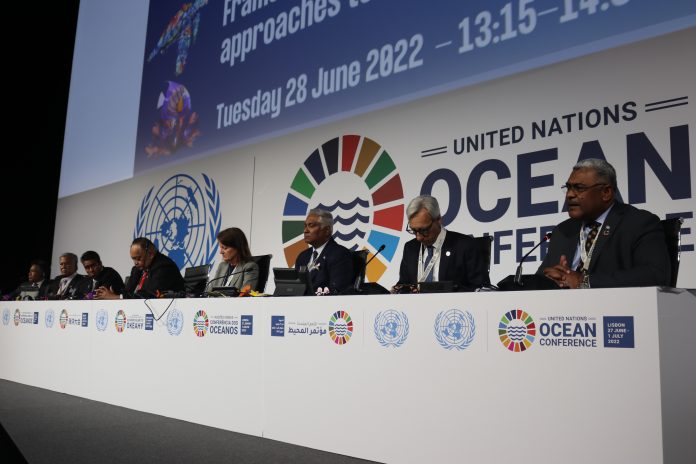 Speaking at the Plenary, Solomon Islands foreign Minister Jeremaiah Manele said the Pacific nation is amending its environmental legislation and is on the verge of signing a maritime boundary treaty with Fiji this year.

He said the government has also carried out a nation-wide consultation and is finalising its marine spatial plan.

Manele said that tuna is key to his country’s food security and employment. The government has outlined innovative actions to manage this highly migratory source.

He also called for increased capacity-building and sustained financial assistance for electronic monitoring programme for fishing vessels to deter illegal, unreported and unregulated fishing to maintain such measures.

Minister for Natural Resources and Commerce of the Marshall Islands, John Silk said the Pacific nation is leading coastal conservation efforts through its Reimaanlok commitments, which place local communities and traditional practices at the forefront of resource management and protected areas.

It is using this to meet the national target of conserving half of all its coastal areas by 2030, and to support regional action through the Pacific Islands Forum 2050 strategy for a Blue Pacific.

“This strategy will also reaffirm the Pacific Leaders’ Declaration on Preserving Maritime Zones in the Face of Climate Change-Related Sea-Level Rise, securing Pacific States’ rights and entitlement to resources within our jurisdiction.

“At the International Maritime Organisation (IMO), the Marshall Islands continues its push for strong action that ensures an equitable transition to zero emission shipping by 2050 at the latest, driven by a carbon levy starting at US$100 per ton in 2025,” he said.

Special Envoy of the Prime Minister of Papua New Guinea Eric Kwa, said the ocean is essential to the identity of its people.

He said PNG established its first-ever national ocean policy in July 2020, an integrated framework that addresses ocean governance and management, demonstrating its commitment to implement Goal 14.

“Establishment of the requisite institutional arrangements, regulatory reforms and infrastructure platforms are ongoing,including of a marine scientific research monitoring and database system,” he said.

Kwa said PNG is also working towards the declaration this year of marine protected areas covering over 17,000 square kilometres.

“Once concluded, the declaration will be included in the Oceans Voluntary Commitments register,” Kwa said.

Vanuatu’s Minister for Climate Change, Silas Bule stressed the need for transformative action to protect the country’s ecosystem, including its coral reefs.

Bule said as part of a coalition of the willing, Vanuatu is planning to ask the International Court of Justice to provide an advisory opinion on how existing international law contains protections for the oceans.

“While this is a court case, the aim is not to assign blame to anyone, but to find a path to bolster ambitious climate action,” he clarified.

He also called on the international community to support the resolution his delegation will table at the next UN General Assembly session.

“The extractive focus of colonial aspirations has led to the current political, economic and environmental disasters”, he said at the plenary.

Timor-Leste Minister for Planning and Strategic Investment, Kay Rala Xanana Gusmao said that the identity of his country — a small island developing State — “is anchored in the sea”.

“While not all are equally responsible for the pressure put on nature, all will suffer from it, and the first victims — always the most fragile and vulnerable — are, cruelly, often the very people who live in greatest harmony with nature”.

He said his country — supported by international law, particularly the 1982 United Nations Convention on the Law of the Sea — recently succeeded in delimiting permanent maritime boundaries with Australia and is currently working with Indonesia to achieve the same.

Kay Rala stressed that the Convention is essential for good governance of the ocean, as “areas without governance are areas where uncertainty breeds”.

“Conservation efforts and sustainable development in Tonga depend on a healthy, resilient ocean that can function, among other things, as a climate regulator. Since 2017, the Government has worked to fulfil its voluntary commitments, including the development of the first national ocean-management plan, the protection of marine areas and the development of a blue-economy strategy to sustainably harvest ocean resources.

“Further, Tonga — as a small island developing State — recognises the importance of science and the transfer of marine technology. In this, partnership is crucial for the success of sustainability initiatives, and he called for a collective effort to assist his country with financing, technology transfer and capacity-building. Despite progress made thus far, ambitious national, regional and global actions are necessary,” he said.

Minister for Oceans and Fisheries of New Zealand David Parker said his country is a maritime State with one of the largest and most biodiverse marine areas in the world.

“The Government has established an oceans and fisheries ministerial portfolio to signal its commitment to a holistic, integrated approach to managing its marine environment. New Zealand has a world-leading fisheries management system”, he

Parker said the protection of threatened species is an important pillar of its oceans and fisheries work.

“Seabirds, sharks, sea lions, penguins and Hector’s and Maui dolphins are at particular risk,” he said.

He said since 2018, New Zealand has spent over NZ$68.5 million(US$42.6 million) on ocean priorities, and more on core funding to regional agencies that are integral to helping Pacific island countries protect the ocean.

“The Decade of Ocean Science for Sustainable Development is an opportunity to deepen understanding of ocean science priorities, such as the ocean-climate nexus and deep-sea ecosystems”.

“New Zealand is engaged in negotiations at the International Seabed Authority on a regulatory regime for deep sea mining, which cannot proceed unless the marine environment is effectively protected,” he stressed.

U.S Special Presidential Envoy for Climate, John Kerry has called on the international community to maintain the momentum of the Our Ocean Conference, held two months ago in Palau, where more than 400 commitments — valued at over US$16 billion — were made.

He also encouraged countries and other stakeholders to join the Illegal, Unreported and Unregulated Fishing Action Alliance.

“The ocean touches every aspect of human life, “from the air we breathe to the food we eat”.

“The ocean is a source of climate solutions as well”, Kerry said at the plenary.

He stressed that the ocean’s problems are human-induced and are subject to human solutions.

AFP confirms it received budget funding to set up a new...