The United Nations Secretary-General has declared an “ocean emergency” at the 2022 UN Oceans Conference co-hosted by Portugal and Kenya in Lisbon.

“Sadly, we have taken the ocean for granted, and today we face what I would call an “Ocean Emergency. “We must turn the tide. A healthy and productive ocean is vital to our shared future.

He said sea levels are rising and low-lying island nations face inundation, as do many major coastal cities in the world.

“The climate crisis is also making the ocean more acidic, which is disrupting the marine food chain. Ever more coral reefs are bleaching and dying.

“Coastal ecosystems, such as mangroves, seagrasses and wetlands, are being degraded.

“Pollution from land is creating vast coastal dead zones. Nearly 80 percent of wastewater is discharged into the sea without treatment,” he explained.

Guterres said some 8 million tonnes of plastic waste enter the oceans every year and without drastic action, this plastic could outweigh all the fish in the oceans by 2050.

“Plastic waste is now found in the most remote areas and deepest ocean trenches. It kills marine life and is doing major harm to communities that depend on fishing and tourism.

“One mass of plastic in the Pacific is bigger than France,” he emphasised.

“We cannot have a healthy planet without a healthy ocean.

“Our failure to care for the ocean will have ripple effects across the entire 2030 Agenda,” he stressed.

He said the ocean produces more than half of the oxygen we breathe and it is the main source of sustenance for more than one billion people.

“And industries relating to the ocean employ some 40 million people. And, a healthy and productive ocean is vital to our shared future, he said.

Guterres also stressed there is good news with a legally binding instrument on the conservation and sustainable use of marine biological diversity of areas beyond national jurisdiction (BBNJ).

“I am pleased to say that there has been significant progress on a legally binding instrument on the conservation and sustainable use of marine biological diversity of areas beyond national jurisdiction.

“A new treaty is being negotiated to address the global plastics crisis that is choking our oceans.

“And just a week ago we saw multilateralism in action with a World Trade Organisation agreement on ending harmful fishery subsidies.

“It is also now well understood that by protecting and restoring the ocean, we are acting to address the climate crisis,” Guterres said.

President of Kenya, Uhuru Kenyatta said the UN proclamation of a Decade of Ocean Science for Sustainable Development supports efforts to reverse the cycle of decline in ocean health.

“Poor management has reduced the ocean’s natural ability to restore itself,” he said. “I find it surprising that we should put such a critical resource at risk.”

“We expect to leave Lisbon with a clear understanding of financing options and pathways. The Ocean is the most underappreciated resource in our planet,” said President Kenyatta. 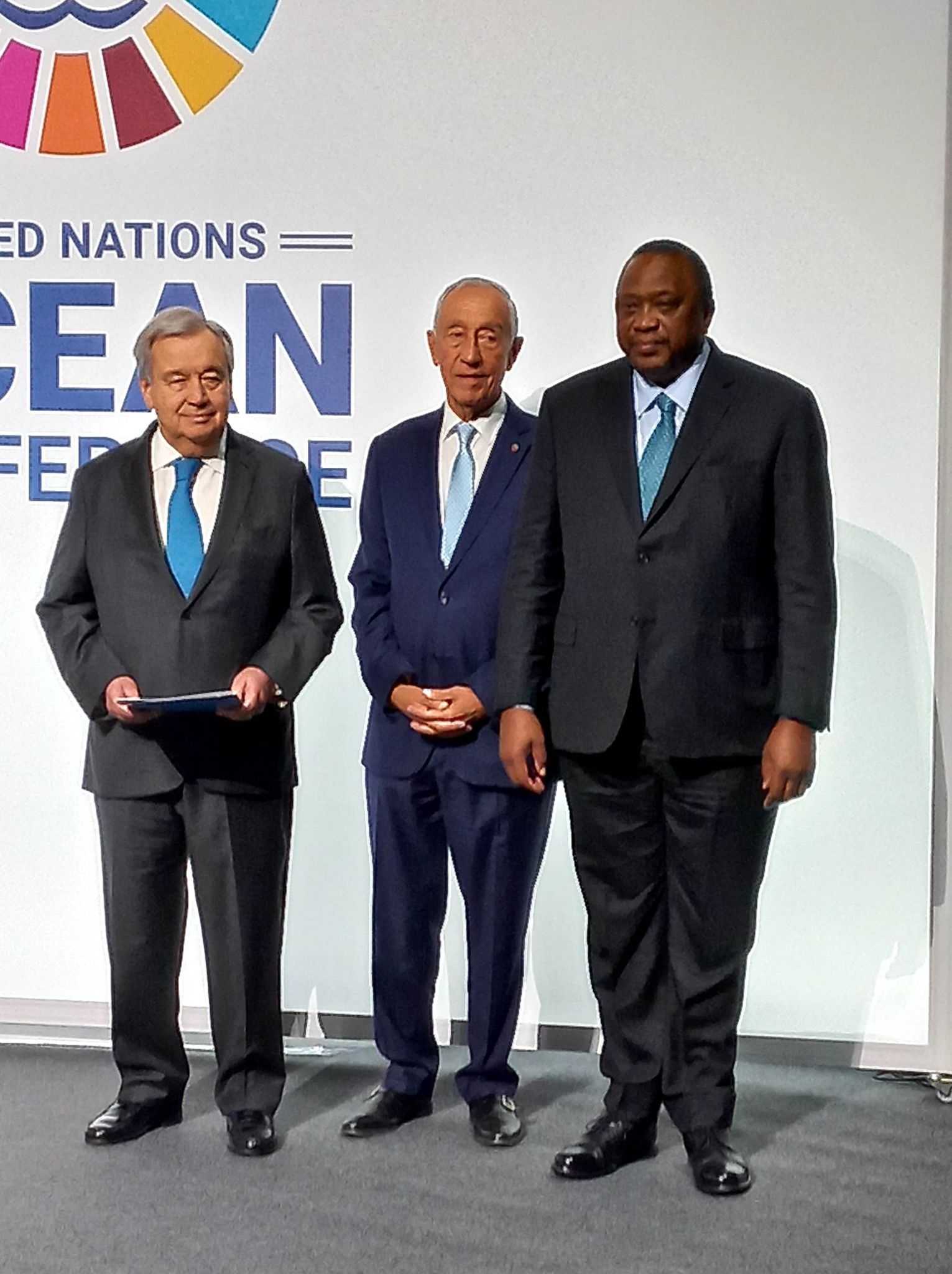 President of Portugal, Marcelo Rebelo de Sousa said the conference is happening at the right place at the right time.

“We must recover too much time that we have lost and give hope a chance, once again, before it is too late.

“The impact of COVID-19 cannot be an excuse for the challenges before us. This must be the conference of re-confinement and ambition, at the right place at the right time with the right approach.” the Portuguese President said

He said Oceans are central in geopolitical balance of power.

“Health care, economic resources, energy, mobility, migrations, scientific and technological development, climate change, all of this is present either in the context or in the outcome of a pandemic, of war and of crisis,” said Rebelo de Sousa.

UN Secretary-General Guterres also urged the international community to commit and unite around the protection and preservation of the oceans with four recommendations to ensure that the tide is reversed.

“We need sustainable business models for ocean economies to operate in harmony with the marine environment, and to guarantee a sustainable seafood industry.

“Second, the ocean must become a model on how we can manage the global commons for our greater good.

“Third, we must protect the oceans and the people whose lives and livelihoods depend on them, from the impacts of climate change.

“Fourth, we need more science and innovation to propel us into a new chapter of global ocean action,” he said.

The theme of the Conference, “Scaling up ocean action based on science and innovation for the implementation of Goal 14: stocktaking, partnerships and solutions,” in line with the UN Decade of Ocean Science for Sustainable Development, stresses the critical need for scientific knowledge and marine technology to build ocean resilience.