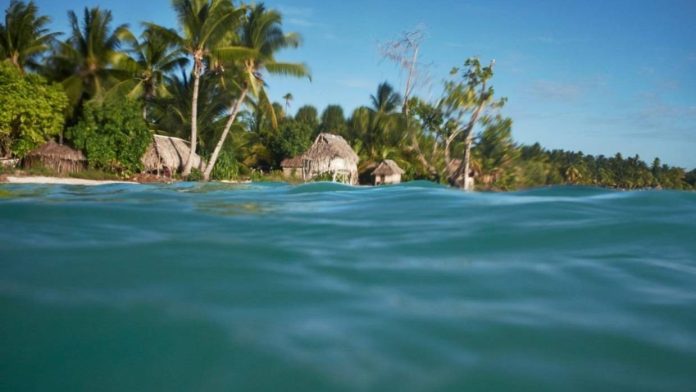 The New Zealand Government quietly dumped a $500m (US$315 million) climate change plan for the sinking Pacific island nation of Kiribati – after spending millions of dollars on consultants and reports.

Half of the atoll’s 110,000 inhabitants live on the crowded capital island of Tarawa, which is increasingly vulnerable to flooding and storm surges. Its sea levels are predicted to rise by up to 0.6 feet by 2030.

Along with the Kiribati government, the Ministry for Foreign Affairs and Trade proposed an ambitious scheme to reclaim and raise 300-hectares area of swampy inhabitable land, and build housing for up to 35,000 people.

It was to be the first large scale climate change adaption development of its kind for small island nations – and part of then-Foreign Minister Winston Peters’ Pacific Reset. A $20m (US$12 million) pot was set aside to develop the scheme.

The idea has been kicking around for close to a decade. In 2015, MFAT began consulting on land reclamations and hired engineering consultants who put a $90m (US$56.8 million) price-tag on the project.

The following year NIWA (National Institute of Water and Atmospheric Research) was commissioned to look at coastal inundation and defences in Kiribati.

And in 2017 Jacobs, another consultancy, was hired to carry out a feasibility report. The study estimated the total cost of the first stage of a three-part, 30-year project would be close to $500m. That did not include costs for “on ground infrastructure.”

Neither New Zealand, nor Kiribati, intended to fund the project – known as Temaiku after the village where it would be sited – and were hoping for investment from the United Nations or World Bank.

But as the true scale of the spending required and the ambitious nature of the development became known, foreign diplomats based in Wellington were privately questioning its merits and practicality.

The huge cost increase caused the project to stall, diplomatic emails released to Stuff under the Official Information Act reveal.
By 2020, no decision had been made on the size, scale or location of Temaiku, nor a business case prepared – but at the request of the Kiribati government, MFAT hired a technical advisor, on a six-month contract.

Because of Covid-19 border restrictions, the contractor was based in New Zealand. They soon drew up plans to hire five employees over two years – including a manager, financial officer, admin assistant, contracts manager and someone to carry out “communications and stakeholder engagement.”

The contractor also worked on a plan to “reorient” the project – it was to be “medium-sized” and cost around $110m (US$69.4 million) – and held a consultation workshop. MFAT say the half-day workshop incurred no costs.

In July last year, officials noted that: “Challenges will include securing sufficient funding…MFAT capacity to deliver … and the environmental and social management required including around existing land ownership and allocation of new usable land.” They asked staff in Kiribati to communicate this to the Government in Tarawa.

A month later, the project was dropped – with New Zealand informing Kiribati the budget was no longer available. But the contract for the technical advisor was extended until March 2022.

Because of Covid-related staff shortages, MFAT couldn’t yet say how much of the $20m (US$12.6 million) budget was already spent, but estimated it was around $4.2m (US$2.6 million).

“Any decisions on the future of the development are the responsibility of the Government of Kiribati,” a spokesman said. “Aotearoa New Zealand’s position is that it will be up to Kiribati to decide whether, and how, to take a land reclamation/land raising project in Temaiku beyond the feasibility investigations.” .

Sea levels returning to normal in parts of the Pacific

Pacific Islands continue the call for climate action on journey to...