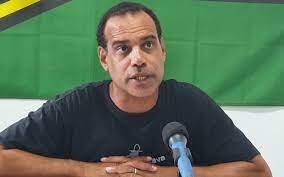 “We think there are a number of amendments that are very bad for the country, and very dangerous for the parliament to be considering,” he said.

“We will not be turning up to Parliament in the hope that we can contribute to not having a quorum to pass the amendment.

“We hope that RMC MPs will also absent themselves tomorrow. I also called on other MPs and parties in the government to boycott too, so that the required quorum would not be met.

“I hope that will force the government to do what it should do or done in the first place, to follow the proper process of consultation and setting up of the Constitutional Review Committee to consider any amendment on the Constitution that it wants to bring to Parliament.”

Regenvanu said Thursday’s Daily Post front page on “VP against proposed review to Chief Justice’s tenure” is a perfect example of why such a constitutional amendment has to go through the proper process of consultation and consideration by a committee.

“Just six days ago, the government headed by Vanua’aku Pati (VP) proposed this new amendment,” he said. “We don’t know where this amendment came from. There has never been any review or study suggesting that this should happen.

“The VP-led government itself tabled this amendment in Parliament and six days later it came out in the media saying it is not going to support.

“This is why we are advocating such important affairs, such as trying to change the constitution of the country. It requires careful consideration and there is a process to follow before making amendments.”

The special sitting on the proposed constitutional amendment scheduled last Friday was adjourned to today, due to lack of quorum.

The government needs 34 votes to pass the amendment.