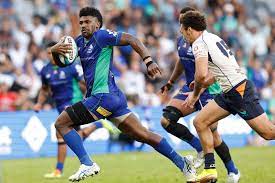 World Rugby investment in the establishment of the Moana Pasifika and Fijian Drua Super Rugby franchises has been rewarded with 43 players being selected for their respective nations for the upcoming World Rugby Pacific Nations Cup 2022, which takes place in Fiji from 2-16 July.

With the objective of increasing the competitiveness of the international game, World Rugby has part-funded the franchises to provide an impactful environment and pathway that will ultimately benefit Fiji, Samoa and Tonga on the biggest stage – Rugby World Cup.

The selection of 43 players for the Pacific Nations Cup from Moana Pasifika and Fijian Drua is an important step in that journey, providing each union with the benefit of access to a group of players performing in an environment geared towards achieving success at international level.

* World Rugby has committed £3.6 million to supporting Moana Pasifika and Fijian Drua
*More than half of the players from the two squads have been selected for their respective national teams
* Of the 43 players involved in the first year of Super Rugby Pacific, 14 will represent Manu Samoa, 13 the ‘Ikale Tahi and 16 Fiji
*Three players join the squads under the ‘homecoming’ eligibility amendment
*Performance pathway geared towards success at Rugby World Cup 2023 and beyond
*National coaches have access to players all year round with optimal preparation availability

Prop Manasa Saulo is the most-capped player in the squad and one of three veterans of RWC 2019 among the Fijian Drua players in the Flying Fijians squad. Among the nine uncapped Drua players selected are centres Apisalome Vota and Kalaveti Ravouvou and winger Vinaya Habosi who all caught the eye in Super Rugby Pacific with their try-scoring exploits.

Four players already capped by Tonga, including second-row Solomone Funaki who scored Moana Pasifika’s first-ever Super Rugby try against the Crusaders in March. Joe ‘Apikotoa and William Havili both scored tries as Moana Pasifika upset the Brumbies in May.

World Rugby Director of High Performance, Peter Horne stated: “This selection marks a significant milestone in elevating performances of Fiji, Samoa and Tonga on the world stage. For the first time, the respective national team coaches have had regular access to a group of players playing together in Super Rugby in an environment that has been built around providing a platform for the players and their teams to be the best they can be when it counts at international level.

“More than half of the players have come from the two Super Rugby Pacific franchises, justifying our investment. This is just the beginning of the journey to Rugby World Cup 2023 and beyond, but it is an exciting step in bolstering our holistic support of the Pacific Islands.”

Fiji coach Vern Cotter said: “Individual players develop by being put under repeated performance expectations. They learn the benefits of conditioning programmes, preview/review exercises, skill development and being challenged mentally. Super Rugby for the Fijian Drua has put these players in demanding situations, and they have learnt to respond accordingly.

“For the Flying Fijians this has been an important step for Fiji Rugby, it not only provides a pathway for U20 and other high-performance programmes but also takes them a step closer to the demands of international rugby.”

Samoa coach Seilala Mapusua said: “The benefits of Moana Pasifika playing in Super Rugby has meant that I was able to select players coming from a tough campaign, which is the perfect stepping stone into test rugby. I no longer have to search for players and wonder if they will be fit enough to play internationals. This will only make Manu Samoa stronger with the inclusion of 14 players from Moana Pasifika.”

Tonga coach Toutai Kefu added: “Moana Pasifika has played a crucial and vital part in developing our players this year. Although it’s only been a year, I have seen a huge benefit across the playing group.

“To have my players, who otherwise would only be playing club, be exposed daily to expert high-level coaching in a professional environment benefits the ‘Ikale Tahi enormously moving forward.

“And, to have these players play against the best rugby players in the southern hemisphere week in, week out will fast track their progress even more.”.