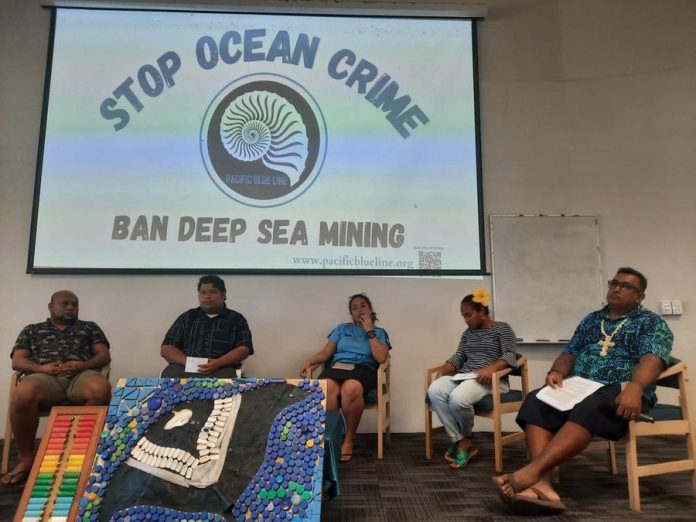 A Framework on the Blue Economy, touted as a way forward, by the Pacific Regional Non- Governmental Organisations Alliance (PRNGO) was launched at the Nukubuco Sand Bank during a prayer Vigil to mark the beginning of the Oceans week.

The Pacific Islands Association of NGOS (PIANGO), Pacific Network on Globalisation (PANG), the Pacific Conference of Churches (PCC), World Wide Fund for Nature Pacific (WWF), Development Alternatives with Women for a new era (DAWN), Pacific Centre for Peace Building, OXFAM in the Pacific, Pacific Disability Forum (PDP), Pacific Foundation for the Advancement of Women (PACFAW)and Pacific Youth Council (PYC) have worked on the Blue Economy paper for more than two years, mandated to promote and protect the interests of Pacific Island peoples and declare that the agenda of the Blue Economy as currently presented and now espoused by our Pacific leaders, may not be in the interest of Pacific peoples.

In his reflections, Reverend Dr Cliff Bird shared the Apostle John’s vision in the book of Revelation where God condemned any kind of trade that occurred across the Mediterranean Seas, in particular slaves-political and economic trade that flourished at the expense of the human wellbeing.

He said along with that trade was misery, death, pain and suffering, these narratives echoes a strong message for us Pacific Islanders that any damage to our ocean is not an option.

“We have to critique, rewrite and understand in our own context what exploitations and the political economy that builds on the wellbeing, justice, peace of the pacific people means, “Reverend Dr Bird said.

As we begin our Ocean’s Week, revitilisation must begin in our churches, in our home, in our relationship with God to understand our role to protect the Oceans.

Revilisalion, he said not only rested on government and non-governmental organisations but with our faith, our theology, our teachings and most importantly how our messages are framed that our lives and lungs are connected to the oceans.

PRNGO Alliance Chairperson who is also PIANGO Executive Director, Emeline Ilolahia said the 2050 Strategy for the Blue Pacific Continent adopted by the Pacific Island leaders are dominated by corporate interests and industrials in the name of sustainability and often times, civil societies voices are lost in the conversation.

“We need to engage from the beginning and not losing out on representing our thoughts, our experiences and co-existence of who we are as Pacific people, reclaiming our relationships with our Oceans as part of our contribution to a Blue Economy,” Ilolahia said.

PCC General Secretary, Reverend James Bagwhan said as a collective of regional NGOs with member networks across the Pacific, the Alliance works together to build collective advocacy towards sound, equitable and participatory decision making processes in the Pacific, with shared views on issues affecting the Pacific region, such as climate change, nature resource extraction, and decolonisation.

“We urged Pacific Islands leaders to reconsider the current Blue Economy framing with critical lens on the geo-political, ideological and neo-liberal economic agenda that present it. These should be closely examined in order to identify who and what, they truly represent,” Reverend James added.

Copies of the Blue Economy Paper was then presented to Tebuai Uaai, Kiribati High Commissioner, Mereseini Marau from the Office of the Pacific Ocean Commissioner (OPOC) and church leaders.