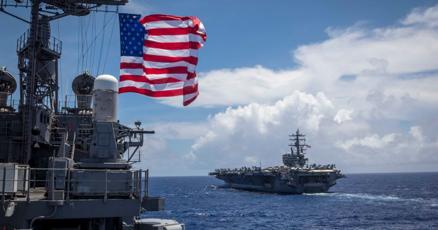 The U.S military will hold its first Patriot live-fire exercise in the Republic of Palau on 15 June.

Air Defence Artillery Battalion based out of Okinawa will be at the Micronesian nation conducting the exercise. It’s the first of its kind to be conducted in Palau, and will be followed by another first – the republic’s inclusion in Operation Valiant Shield.

“The growing U.S military presence in Palau is a good sign – it’s a sign that Palau is important strategically to the U.S.,” said Ambassador Hersey Kyota, Palau’s ambassador to the United States.

Valiant Shield was last held in Guam in September 2020, but this year will be expanded to Palau and Micronesian territories. It’s expected to bring roughly 500 to 800 U.S. military personnel to Palau.

Kyota, as the longest serving ambassador to the U.S is also the dean of the U.S Diplomatic Corps. It’s largely ceremonial role, he said, and even jokes that it means his name gets called out during events such as the State of the Union Addresses. But his longevity has also given him a front row seat to changes and discussions surrounding the relationship between the Palau and the U.S.

“The National Security council has said that Palau is important — now than ever — in the security interests of the U.S and its other allies in the Indo-Pacific region,” he said. “There’s no secret that China is interested in building control of the island and the region.”

He said Palau, which was the site of some of bloodiest battles in World War II, provides “one of the westernmost defensive position the U.S can take.”

Palau became a sovereign state in 1994, after signing a Compact of Free Association or COFA with the U.S in 1982. The agreement provides a package of financial assistance and national defense and security. In return, the U.S gained exclusive freedom to operate and base American armed forces across the COFA territory.

Palau is situated east of Indonesia, south the Philippines and northwest of Papua New Guinea. The latter having signed an agreement with the China’s Foreign Minister Wang Yi, according to a Reuters report. Prime Minister James Marape said China is a major trade partner and the biggest buyer of the Pacific nation’s gas exports.

In recent years, U.S military presence in Palau has increased. Kyota noted the construction of the U.S. Aerial Domain Awareness radar and radio towers, and the building up of joint-use facilities such as the Angaur airfield, Angaur dock, and Ngatpang shooting range.

Military officials have said the U.S Indo-Pacific Strategy emphasises the Pacific in order to counter what it says is China’s “coercion and aggression” in the region.

Kyota said the U.S presence is welcome after many requests over the decades. The most recent discussion was with ambassadors from other freely associated states, including the Republic of Marshall Islands and the Federated States of Micronesia — Chuuk, Kosrae Pohnpei and Yap.

“Presence is a deterrent,” he said, noting China’s aggression in the Pacific.

At a recent meeting in Guam that included Gerald M. Zackios, ambassador of the Republic of Marshall Islands to the U.S, he told U.S policy advisors that in their strategy dialogue for the Pacific “we should be more proactive instead of being more reactive.”

The increasing U.S presence, also comes at a time when the U.S and Palau have resurrected negotiations for a compact agreement. This round of negotiations surrounds economic support for the island nation — the military defense provision isn’t up for negotiation.

However, there’s some likelihood that ramped up U.S military activities will be a part of discussions.

“He seems very genuine and very interested in knowing what Palau needs. So that’s a good thing,” Kyota said, adding Yun has said he’d like to visit Palau and other freely associated states this month.

Kyota said Whipps’ administration is working on their proposal. While he couldn’t speak to the details of the proposal, Kyota said previous envoys “didn’t address Palau’s concerns with postal services and other federal programs” that tie the two nations together.

“So we insisted on a new envoy and Yun was appointed so we’re being given the chance to submit our counterproposal … to what the U.S was offering,” he said. “Also, the money from the U.S federal government wasn’t sufficient in my view.”

In terms of the dollar amount connected to the Compact agreement, he said the Whipps administration is “still putting together the numbers.”

“But I think they’re being very careful about the work, we don’t want to leave anything out,” he said.