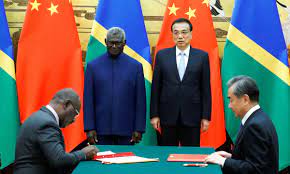 China’s foreign minister will visit Solomon Islands this week, one month after signing a security agreement with the Pacific country, on a broader tour where China is seeking more deals in the region.

Wang Yi would visit Honiara with a “nearly 20-member delegation”, the Solomons’ government confirmed on Tuesday, calling the trip a “milestone”.

“The highlight of the visit is the signing of a number of key bilateral agreements with the national government,” said Li Ming, China’s ambassador to Solomon Islands.

Among agreements expected to be signed is the controversial security agreement between the countries that made headlines in March after a draft was leaked. News of the deal led to fears China could establish a military base in the islands, though this has been denied by both parties.

The Solomon Islands’ prime minister, Manasseh Sogavare, said the Chinese foreign minister’s one-day visit would be a “milestone” in the two countries’ relationship.

Sogavare said he looked forward to a “productive engagement” with Beijing, “an important development partner at a very critical time in our history”.

News of the Chinese tour emerged ahead of a meeting on Tuesday of the U.S, Japanese, Australian and Indian leaders at the Quad summit in Tokyo, with the aim of countering China’s growing economic and military clout in the region.

It comes amid an “uptick of tempo” in China’s engagement in the Pacific, according to security experts.

“The tempo has certainly increased in the last couple of years,” said Dr Anna Powles, a senior lecturer in security studies at Massey University in New Zealand. “Certainly, Canberra, Wellington and Washington will be watching very closely to see what comes out of these meetings. There certainly is greater recognition now that China is stepping up its engagement in the Pacific and that China has security interests and sees itself as a security stakeholder in the Pacific.”

Jonathan Pryke, director of the Lowy Institute’s Pacific Islands program, said it was an “extraordinary and unprecedented marathon of the region … that will leave a lot of people in the west nervous”.

“It’s not just what the trip signals for China’s post-Covid re-engagement with the region, but what kind of deals he will be signing with counterparts along the way.”

Vanuatu has just signed a contract with China for the construction of a new runway extension at Pekoa airport on the island of Santo, to allow access for larger aircraft, making it accessible for the delivery of humanitarian aid.

China’s interest in Kiribati, meanwhile, has been of great concern to Australia, New Zealand and the US, due to its fishing resources and geostrategic location in the central Pacific.

Kiribati and Solomon Islands both had diplomatic relations with Taiwan until 2019 when they switched to recognise China.

“China is certainly very keen on shoring up its interests in Kiribati. It’s of significant strategic value, in terms of resources and geo-strategic location,” said Powles. “My assessment is that Kiribati is in China’s sights, but whether that will result in a security deal is unclear yet.”

Teburoro Tito, Kiribati’s ambassador to the U.S and the UN, told the Guardian that China had agreed in principle to finance the refurbishment of a second world war runway on Kanton island, but denied a broader security deal was in the works.

Tito said the Kiribati government had approached Washington about rehabilitating the port and runway but “the US turned us down”.

“They said it would take time, maybe five, six years, to provide financing,” he said. “So the president asked the Chinese ambassador and he said yes in principle, though nothing has been signed,” Tito said.

Tito said that while the funding agreement had been made “in principle” it would not happen unless the Kiribati president officially requested funding from China, and no formal request had yet been made.

The project would achieve the twin goals of developing tourism in the Phoenix, site of some of the most pristine reefs in the world, and providing a refuelling station between Kiritimati and Tarawa.

Kiribati has a long-standing defence treaty with the United States, the 1979 Treaty of Tarawa. “There has been a lot of talk about strengthening and renewing the treaty, but none about abrogating it,” Tito said.

The treaty gives the U.S veto power over military installations in Kiribati built by third nations.