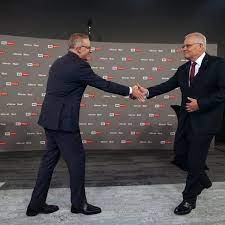 Late last year, more than 100 former diplomats and officials called for a new Australian foreign policy — with climate action at the centre — to help cement Australia’s future in a world rapidly shifting to net-zero emissions.

Failure to act on climate change, they argued, would erode our national interests and international influence. Australia’s allies, partners and competitors would penalise us for not pulling our weight. Regardless of who wins the federal election, Australia’s next government must heed this advice.

There’s a saying that “all politics is local”. But Australian climate politics is dictated as much by the realities of a warming planet, and seismic shifts in global energy markets, as by marginal electorates in Queensland.

Managing the transition to a net-zero emissions economy must be a priority task for the next government. Our strategic and economic success depends on it.

How did we get here?

In recent times, Australian foreign policy has promoted the nation as an energy superpower – a major supplier of coal and gas to Asia. Reducing emissions has been a secondary focus, as Australia’s diplomatic machinery is tasked with promoting fossil fuel exports.

This wasn’t always the case. When a scientific consensus on global warming emerged in the late 1980s, the Hawke Labor government appointed an ambassador for the environment to promote climate action, and supported ambitious national targets to cut emissions.

By the mid 1990s however — under the influence of a powerful fossil fuel lobby and following a national recession — the Keating government was increasingly concerned about potential economic costs of climate action. The subsequent Howard government decided taking serious climate action was not in Australia’s interests.

The argument then, as it is now, was that Australia’s economy depends on fossil fuels, and cutting emissions would cost us relatively more than it would other countries.

So ever since, rather than act on climate change, Australia has sought to minimise obligations to cut emissions while expanding coal and gas exports.

Today, Australia has one of the weakest 2030 emissions targets in the developed world. At last year’s global climate talks in Glasgow, Australia refused to join other developed nations in strengthening its ambition.

United Nations Secretary-General Antonio Guterres describes Australia as a holdout on climate action. He is right. Australia is among a small, isolated group of countries — including Russia and Saudi Arabia — resisting global efforts to cut emissions.

Not by coincidence Australia is also the world’s third-largest fossil fuel exporter, behind only Russia and Saudi Arabia.

The world is changing around us

When Prime Minister Scott Morrison last year sought support from his Nationals colleagues for a net-zero by 2050 target, he urged them to accept economic reality. The world is transitioning to net-zero. And climate action is now a key pillar of the Western alliance, and so key to Australia for national security reasons.

Morrison’s arguments show how the world has changed since he came to power in August 2018.

Instead, Australia’s key destination markets, such as Japan, China and South Korea, are phasing out fossil fuels. In the past two years alone, more than 100 countries, representing around 90% of the global economy, have committed to net-zero emissions.

Climate has also moved to the centre of global geopolitics. Major powers are integrating climate into defence and strategic planning, foreign policy, diplomacy and statecraft.

The European Union will next year start imposing border costs on imports from countries not doing enough to cut emissions, a move which could eventually shave A$12.5 billion (US$8.6 billion) from the Australian economy annually. G7 countries are planning a “climate club” to impose costs on countries that don’t meet shared standards for climate policy.

In the US, a new Indo-Pacific strategy signals an intention to pressure countries such as Australia to set a stronger 2030 target. This is partly so the US and allies might work together to press China to cut emissions.

Security mismatch in the Pacific

The recent security deal between the Solomon Islands and China may demonstrate how Australia has yet to integrate climate action into its own statecraft.

For decades, Pacific island countries — including the Solomon Islands — have argued climate change is their first-order security threat, particularly for atoll island states who face inundation from rising seas.

But those concerns are not reflected in Australia’s current efforts to engage more closely with the Pacific. The recent Pacific Step Up strategy is largely driven by concern that China could leverage infrastructure lending to establish a military base in the region.

A former Australian intelligence chief, Nick Warner, says Australia’s position on climate has “undermined our standing in the Pacific” — a view echoed by former Australian High Commissioner to the Solomon Islands, Peter Hooton.

Australia as a clean energy superpower

Our foreign policy must be retooled to reposition Australia as a clean energy superpower, and to seize the economic opportunities that will flow.

As the sunniest and windiest inhabited continent on the planet, Australia has world-class renewable energy resources and enviable reserves of minerals needed for the electric vehicles, batteries and wind turbines of the future.

Australia is well-placed to export zero-emissions electricity to growing economies in Asia. Our renewable energy advantage also means we can competitively produce zero-carbon versions of the commodities the world urgently needs – steel, aluminium, hydrogen and fertilisers.

The Business Council of Australia estimates clean export opportunities could generate 395,000 jobs by 2040. With the right policy framework, Australia could grow a new clean energy export mix worth A$333 billion each year, almost triple the value of existing fossil fuel exports.

A big task for the next government

Whichever party wins the election on May 21 should reposition Australia as a global climate leader. This will require negotiation between domestic constituencies resisting change and an international context that’s changing regardless.

The Department of Foreign Affairs and Trade, and Australia’s diplomatic network, should be tasked with promoting climate action. And a climate change ambassador should be appointed – separate from the existing ambassador for the environment.

Australia should also bid to host the annual UN climate summit and co-host the UN talks with Pacific island states.

Above all, the next government must strengthen Australia’s 2030 emissions reduction target before global climate talks in Egypt in November. We should at least match our key allies and commit to halving emissions this decade. Failure to do so will only bring increasing diplomatic and economic costs.