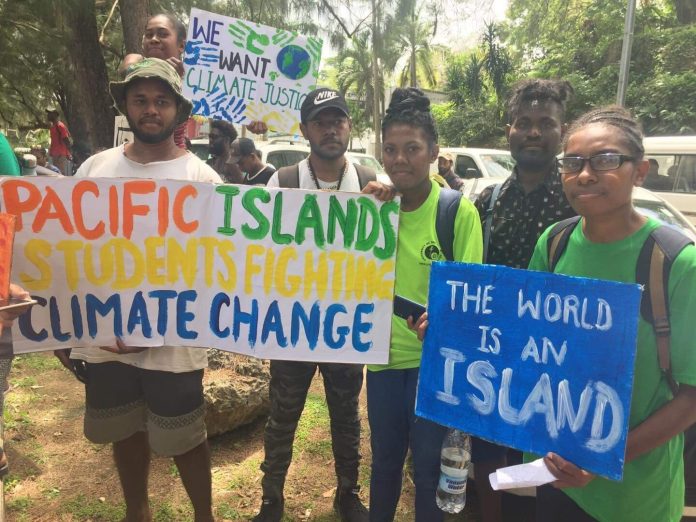 A global alliance of civil society groups, representing over 1500 civil society organisations in 130 countries, has launched today to support a powerful new climate justice initiative by the Government of Vanuatu to take the human rights impacts of climate change to the world’s highest court, the International Court of Justice.

The Government of Vanuatu has announced that it will take the proposal to the United Nations General Assembly in September, which will then vote whether to refer the matter to the court.

The United Nations General Assembly will consider the Government of Vanuatu’s proposal in September, requiring a simple majority vote to send the question to the International Court of Justice. The civil society alliance is calling on all countries to support the Government of Vanuatu’s proposal with a vote in favour of the resolution in September reflecting a global commitment to fight the climate crisis and protect human rights.

“Youth are leading this campaign because they are fighting for their future. The science is clear, if the world doesn’t get serious about stopping climate change this decade, our future will be destroyed. We are literally fighting for the survival of our lands, our oceans, our culture and the generations unborn.

“The launch of the alliance marks an important milestone in the campaign. Although the ICJAO was born in the Pacific, under the leadership of the Vanuatu Government, it is time for states across the globe to indicate how they will vote on this important issue.

“Youth everywhere are entitled to a right to equal access to justice and the right to remedy. Seeking clarification from the International Court of Justice to secure their interests and their children’s interests is, therefore, their right,” said Romabeth Siri, PISFCC Vanuatu Campaigner

Lavetanalagi Seru, Regional Policy Coordinator, Pacific Islands Climate Action Network said “Seeking an advisory opinion from the International Court of Justice on human rights and climate change is another tool in our toolbox that we must use in our urgent and collective efforts to bolster action on climate change. In many frontline climate change affected communities today, the most vulnerable, including women and girls, elderly people, people with disabilities, indigenous communities, LGBTQI, youth and other marginalised groups, have, and will continue to experience their basic human rights being undermined.

“We applaud the Government of Vanuatu on its intention to seek a resolution from the UN General Assembly this year, and we call on the global civil society family and most importantly on all countries to support this important initiative, which is predicated on human rights and intergenerational equity”.

Joseph Sikulu, Pacific Director, 350.org said, “The Pacific has already shown that governments and civil society can work together to achieve impactful change; the 1.5 degree benchmark being ingrained into the Paris Agreement is a testament to that. Through this alliance we hope to continue to weave together advocacy at all levels to build momentum behind the Vanuatu Government’s push for this Advisory Opinion.”

“We will work to strengthen our ties as a Pacific family and build an intergenerational movement of Pacific people everywhere rallying behind the ICJAO.”

“This initiative by the Government of Vanuatu puts the protection of human rights at the heart of our struggle for climate justice. We are witnessing how escalating climate impacts are undermining people’s rights in every way. Hundreds of millions of people impacted by climate change across the world, and particularly in developing countries, are being denied their fundamental rights- the right to food, water, shelter, property, freedom of movement, livelihoods, health and a clean environment. We urge all countries to support this initiative and recognise that the climate crisis is at its core a human rights crisis.”

Greenpeace Australia Pacific Climate Justice Campaigner Justin Rose said “Whoever leads the Australian Government has a unique opportunity to show true friendship with our Pacific neighbours by standing in solidarity with them in supporting Vanuatu’s bid to have the world’s highest court consider the world’s most important challenge – climate change. The recent flood disaster in Australia demonstrates with tragic clarity the truth of the warnings our Pacific neighbours have been sending us for many years – no one is immune to the climate crisis”.