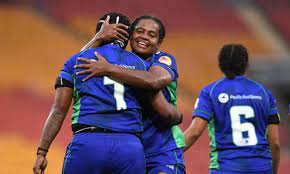 When Captain Cook spent time in Fiji in 1774, he and his crew were astounded by the “drua” – double-hulled boats that were then some of the most advanced sea vessels in the world. Elegant in their simplicity, they were created by binding together buabua trees, not with nails but by “magimagi”, or coconut fibres.

Over time, this shipbuilding genius went into decline, but nearly 250 years later, Fijians re-emerged as the world’s best – not in the water this time, but on the rugby sevens field. And now, in 2022, the ancient trailblazers have again risen in the 15-a-side version of the game, courtesy of the Fijiana Drua’s debut in the women’s Super W competition.

While the Fijian Drua men’s team have struggled on their way to a 1-7 record – their best players have been poached for years by Australian, New Zealand and UK teams – the women’s team have swept all before them in their inaugural Super W year, playing a brand of entertaining rugby that would make their pioneering ancestors weep with pleasure.

These Drua are bound not by coconut fibres but by faith and the “veilomani” spirit – a love for each other – and they have revolutionised women’s rugby in Australia with an intoxicating brand of running rugby not seen since the Mark Ella era of the 1980s.

They have comprehensively defeated the five established Australian teams and their 5-0 record – and remarkable 184-51 for and against numbers – has earned them the title of minor premiers and a place in Saturday’s grand final against the NSW Waratahs.

The Waratahs are well resourced and have been the imposing powerhouse of the Super W competition – they had been undefeated since its inception – but their five-year winning streak was brutally ended by the Drua earlier this month in a 29-10 reverse, with one bewildered TV commentator exclaiming: “This is electric, this is fantastic, I can’t keep up.”

The Fijiana Drua revolution began in their first Super W outing at the beginning of March when three front rowers scored their first three tries, including a 65m run by prop Karalaini Naisewa. They overwhelmed the Melbourne Rebels 66-5, leaving Mel Kawa, the disoriented Rebels captain, speechless. “What can I say? I’ve never played 80 minutes of [rugby] sevens before,” she said. “They kept coming.”

The team is the most under-resourced team in the competition and their giantkilling feats have provided unbridled joy for patient fans.

“We’ve known for a long time that our women are extremely talented,” says Lizann Vailasi, a Fijian Sydneysider who watched the team dismantle the Western Force at Leichhardt Oval in round three. “We knew they would compete in the Super W but they have been a revelation and we can’t stop talking about them.”

Beyond jubilant Australian-Fijian fans, the impact in Fiji has been profound according to Fiji rugby union women’s development manager Vela Naucukidi.
“Their games are live on TV here in Fiji every weekend, and it’s just amazing,” Naucukidi says. “It helps us who are actually working on the ground trying to develop women’s rugby in Fiji.”

While some commentators have made slippery rationalisations that the Fijiana Drua are an international team playing in a provincial competition, the facts tell a different story.

Only six of the team have played internationally for Fiji, while the rest of the squad have only been playing the game for between one and three years. Try-scoring machine Vitalina Nakore is a former footballer whilst the ball-handling skills of Akosita Ravato are a recent addendum to her previous career as a basketball player.

Also worth noting, in the 15-a-side version of the game, Fiji are ranked 21st in the world, behind non-traditional rugby nations such as Hong Kong, Sweden, Germany and Kazakhstan.

Yet the Drua’s rugby has been breathtaking across all facets of the game – high-level conditioning, physical defence, laser-like passing, instinctive and intuitive support play, slick running and clinical finishing. After games they sing hymns for their opponents. It is a total rugby package in the spirit of “the game they play in heaven”.

In the final game of the regular season, when the ACT Brumbies tried to strangle the creativity of the Drua’s running game, they showed flexibility and responded with a hard-fought victory based on more traditional set pieces centred on scrums and lineouts.

Captain Bitila Tawake has perhaps been the perfect representation of what the Fijiana Drua stand for. Her post match interviews are a mix of humility, shyness, gratitude and joy.

Nothing phases her and she is focused on the job at hand: “First we’re just doing things one step at a time,” she says. “We didn’t expect it to be this big and we came in as underdogs in this tournament.”

Along with coach Senirusi Seruvakula, Tawake is ensuring the Drua maintain their identity. “We are just doing what we do best with our own free-flowing Fijian style of game – breaking the line, offloading and support play.”

Instead of streaking across the Pacific Ocean, the Fijiana Drua are streaking across Australian rugby fields. But both voyages have the same outcome – opening up new possibilities for their people.

Awaiting them in the grand final are the wounded Waratahs, who are hoping for revenge and to deliver a winning send-off for their 37-year-old Fijian veteran Iliseva Batibasaga. Either way, the women’s game in Australia will never be the same again.

We don’t do Russians – Fiji Health Minister Dr Waqainabete on...