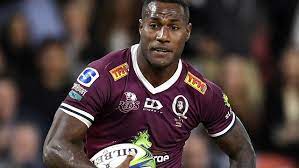 The Queensland Reds will look to continue unleashing returning star Suliasi Vunivalu, excited about what he can do as they prepare to begin Kiwi action on Saturday.

The Reds enter Super Round in third position on the ladder, one point behind the top two as they prepare for the Hurricanes on Saturday.

Brad Thorn’s men were boosted by the return of Vunivalu during their four-point win over the Rebels, with the flying winger instantly making an impact as he put Hunter Paisami through a hole with one of his first touches back.

It marked his first game back since last year’s Trans-Tasman competition, with the league convert proving unstoppable against Kiwi opposition as he scored four tries in four games.

“He always makes an impact wherever he goes, he’s a quality player and a freak,” centre Hamish Stewart said on Vunivalu.

“It’s good to have him back in the team. He’s an elite player in the air and we’ll look to unleash him against the Kiwis.

“We’re looking forward to exposing him against the smaller blokes, letting him run over them so we’re excited for it.”

Whilst they will be pleased by their start to the season, Stewart and the Reds have always had their eyes on the crossover portion of the competition, eager to rectify last year’s disappointing showing.

“It was a tight win but the boys bounced back into this week with energy and enthusiasm to get into the Kiwis this week which we’ve been excited about,” he said.

“It’s a different thing and we’ve been training for it this week so we’re looking forward to it.”

With the Reds set to finish a triple-header of action on Saturday as part of Super Round, Stewart was eager to celebrate the inaugural three-day event with a strong performance.

“They are a class team, all Kiwi teams are and we’re ready to bounce into them,” Stewart added.

“We started the year playing the Australian teams which is a different format of Rugby and now moving into the Kiwis, we’re looking for the quick taps so everyone will be on their toes ready for that.

“All the boys are looking forward to this weekend. It’s going to be a good game with all the double-headers going on and something all the teams will look forward to,” he said.

Quarter-final places up for grabs as Rugby World Cup 2021 pool...