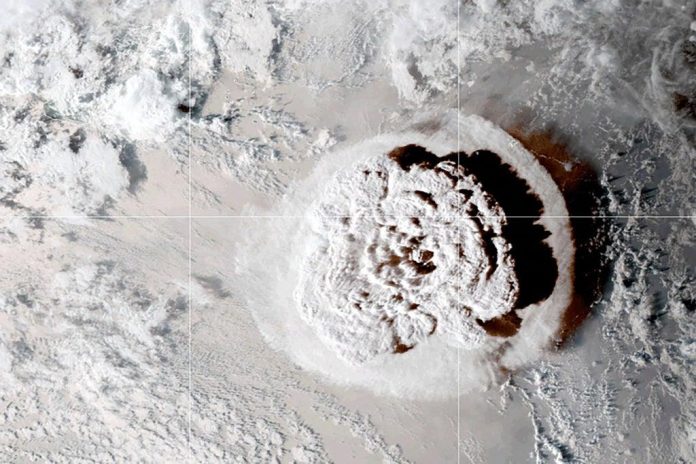 A smaller eruption in Tonga’s Hunga Tonga-Hunga Ha’apai (HTHH) volcano may have primed it for the massive explosion that happened in January this year, revealed a new study.

The smaller eruption may have sunk the volcano’s main vent under the surface of the ocean, priming it for the massive explosion a day later, triggering a tsunami and sending plumes of gas, dust, and ash 36 miles into the sky, suggested the research, published last week in the journal Earthquake Research Advances.

“This is definitely, without a doubt, the largest eruption since Mt Pinatubo in 1991,” said study co-author Melissa Scruggs, who recently completed her doctorate at UC Santa Barbara.

The eruption had led to widespread damage to Tonga’s infrastructure and had cut off the island nation’s communications with the rest of the world.

In the new study, Dr Scruggs compared the event to the 1883 eruption of Krakatoa, which was heard 3,000 miles away.

HTHH is a stratovolcano, which means it has a large, cone-shaped mountain prone to periodic violent eruptions, but which usually experiences milder activity.

Observing a set of data, scientists estimated the massive 15 January eruption had started at 5:02pm local time, while the US Geological Survey recorded a seismic event around 13 minutes later at the vent location.

The first two hours of the eruption were particularly violent, with activity fading after about 12 hours.

But researchers have now found out that volcanic activity had actually kicked off on 20 December 2021, with earlier eruptions taking place in 2009, 2014 and 2015.

The volcano earlier consisted of separate islands, with two of them being the highest points along the central crater, until eruptions from the volcano’s main vent created a land bridge and united them.

But the explosion from the main vent on 14 January razed this connection, sinking the vent beneath the ocean’s surface and blowing most of the islands up.

“Had that land bridge not been taken out, the 15 January eruption might have behaved just like the day before because it would not have had that excess seawater,” Dr Scruggs said.

Researchers now believe seawater likely played a large part in the violence and force behind the massive eruption on that day.

They said a massive eruption of this scale – “much like a bottle rocket” – requires the right ratio of water and gas to provide the force needed to send it skyward.

Scientists suspect vaporising seawater caused the lava to fragment into microscopic ash particles which were joined by tiny ice crystals once the steam froze in the upper atmosphere.

This combination of forces, including temperature change, generated incredible amounts of static charge separation that flashed above the eruption, creating a staggering amount of lightning, researchers said.

“But the volume of the eruption was not the big deal. What was special is how the energy of the eruption coupled to the atmosphere and oceans: A lot of the energy went into moving air and water on a global scale,” said Frank Spera, another author of the study from UC Santa Barbara.

With scientists still piecing together what happened at the volcano, they said the event highlighted the danger posed by unmonitored submarine volcanoes.

The researchers hope to further study the ash collected from this eruption, which they said can shed light on the type of magma that erupted, how much of it there was and also how much seawater was likely involved in the eruption.

“There’s so many questions that have been raised. Things we didn’t even think were possible have now been recorded,” Dr Scruggs said.

Pressure grows for deal to save nature at crunch talks in...