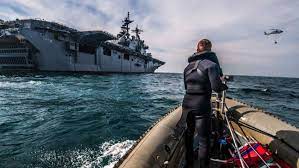 Australian officials are alarmed at Solomon Islands’ planned security deal with China with the defence minister, Peter Dutton, stating “we would be concerned clearly about any military base being established” less than 2,000km off the coast.

Solomon Islands has signed a policing deal with China and will send a proposal for a broader security agreement covering the military to its cabinet for consideration.

According to a copy of the draft security agreement circulating on social media on Thursday, it would allow China to base navy warships in the Pacific.

The arrangements are also likely to worry the United States, which said in February it would open an embassy in Solomon Islands after senior U.S administration officials expressed concern China wanted to create military relationships in the Pacific islands.

Solomon Islands switched diplomatic ties from Taiwan to Beijing in 2019, which partly fuelled discontent that led to riots in the capital, Honiara, in November.

Australia has historically provided security support to Solomon Islands and led a policing mission to restore order in the wake of riots, at the request of prime minister Manasseh Sogavare.

Australia’s minister for home affairs, Karen Andrews, told reporters on Thursday the Pacific was Australia’s “back yard”, when asked about the possibility of the Chinese military operating in Solomon Islands.

Marles called on the government to do “everything” to support the Pacific “to make sure at the end of the day Australia is the natural partner of choice when it comes to security”.
Dutton rejected any suggestion the Australian government had dropped the ball in the Pacific, arguing it had a “fantastic relationship” with Solomon Islands and said despite overall cuts to foreign aid the share going to the Pacific had increased.

“We would be concerned clearly about any military base being established and we would express that to the Solomon Islands government,” he said.

Dutton warned Pacific nations to be “be realistic about China’s footprint, their exertion, their pressure and the way in which they conduct their business”.

“I don’t think it’s consistent with the values that we share with the Solomon Islands and with Tonga and other … near neighbours of ours in the region.”

Karen Galokale, permanent secretary for the Ministry of Police, National Security and Correctional Services in Solomon Islands, told Reuters a cooperation agreement signed between Solomon Islands and China covered policing. She confirmed a wider agreement was being discussed.

“Any other arrangement on broad security would be just the same as the Australian agreement,” she said in a telephone interview, giving the first public confirmation of the broader security talks. “It will have to go to cabinet.”

Australia has a bilateral security agreement with Solomon Islands, covering the deployment of police and armed forces, signed in 2018.

Anthony Veke, minister for police in Solomon Islands, said in a statement on Thursday that he had signed a memorandum of understanding (MOU) with Wang Xiaohong, executive vice minister of China’s Ministry of Public Security, on policing cooperation in a virtual meeting on 18 March.

“The signing of this MOU simply shows to the global community that we are here building meaningful cooperation, one that is based on teamwork and seriousness to develop Solomon Islands,” Veke said.

A draft copy of a security MOU circulated on social media states it would cover Chinese police, armed police and the military assisting Solomon Islands on social order, disaster response and protecting the safety of Chinese personnel and major projects in Solomon Islands.

Galokale said she was aware of the social media reports and would not speculate on the timing for the process to approve a security cooperation deal with China.

“We have a broad security treaty with Australia and policing cooperation. If there is anything with the PRC it will be just the same,” she said, referring to China.

On Tuesday, the Royal Solomon Islands Police Force published photographs on its website of police training with replica guns provided by China.

In November, about 200 police and soldiers from Australia, New Zealand, Fiji and Papua New Guinea arrived in Honiara within days of the riots to help restore order.

Galokale said the policing arrangement with China was the same as arrangements Solomon Islands already had with countries such as Australia, New Zealand and Papua New Guinea.