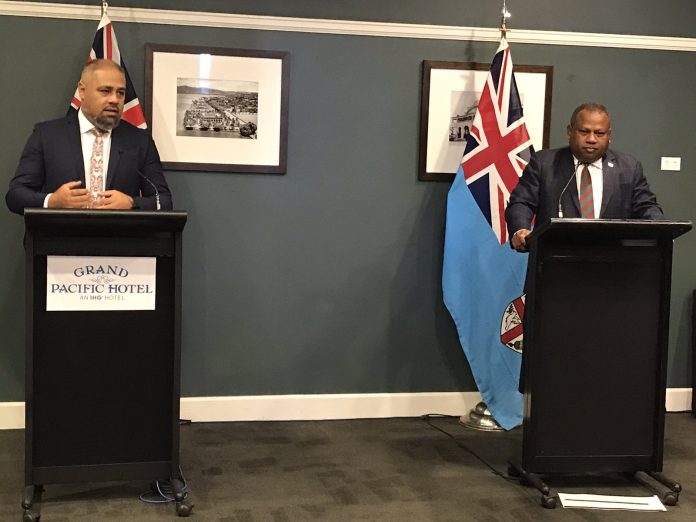 Henare said the meeting with Dutton is to see how the New Zealand Government could provide further assistance to the Ukrainian Government.

“Monday, the New Zealand Prime Minister Jacinda Ardern announced that we will issue further support to the conflict between Ukraine and Russia,” he said.

“We have provided financial support through the United Nation mechanisms that the ministers had already discussed. We are against the war.

“What we are trying to do though is to continue supporting by looking towards what does this mean and the impact it has on our people here,” he said.

He said the New Zealand Government had offered to provide equipments to the people of Ukraine predominantly hamlet and body armour.

“We had offered to provide equipments to the people of Ukraine predominantly hamlet and body armour. We are in the logistics of sending it up to Ukraine,” he said.

“I think you are right, New Zealand and Fiji that it does have an impact on us. I can say that in our perspective, we have a large Ukraine population amongst our people.

“We have strong ties to the Ukraine, we will continue to do what they can to support and finally we are trying to arrange for an opportunity for me to speak to the minister,” he said.

Fijian Minister for Defence Inia Seruiratu said the voices of the people of Fiji had been channelled through the United Nations meetings.

Seruiratu said Fiji and its fellow Pacific Island countries have united as nations of peace loving people to condemn the conflicts in Ukraine.

“We are concerned, definitely is going to affect all of us. We are small countries, we strongly support multilateral relation,” he said.

“Our voices have been channelled through the United Nations meetings. We stood in solidarity with over 100 member countries in calling for a ceasefire and commencement of talks.

“Fiji had called for an immediate ceasefire and the urgent withdrawal of military forces in accordance with internationally recognised borders,” he said.

He said there is a need to return to the path of diplomacy as it is the only road that leads to peace.

A peacekeeper and a leader: Unaisi Bolatolu-Vuniwaqa, UNMISS Police Commissioner A...