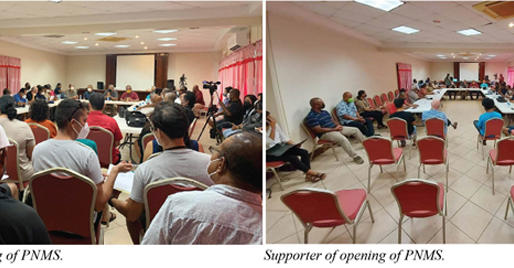 A large crowd of people showed up at the public hearing to oppose the proposed bill to re-open the Palau National Marine Sanctuary to long-line and purse seine fishing.

With the Our Oceans Conference (an international conference on oceans’ health) slated to be held in Palau five weeks from now, Palau’s national congress is contemplating overturning one of Palau’s landmark legislations, the Palau National Marine Sanctuary Act (PNMA), restoring long line and purse seine fishing within the exclusive no-take zone of the sanctuary.

Elia Yobech, a member of BOFI (Belau Offshore Fisheries Inc.), implored OEK not to re-open PNMS to foreign fishing boats. “We have just started and we are growing. It is only the pandemic that is keeping us from expanding. We have one boat, one on the way, and another being refurbished. We can expand, it is just the pandemic that is preventing us. Again, please don’t open to foreign fishing boats.”

BOFI was created as part of the effort to develop domestic fisheries and to encourage local people to start their own fishing companies, one of the three mandates of the PNMS.

Opponents of the bill say that both direct and indirect benefits to Palau as a result of the PNMS law include millions of dollars in grants from various institutions and countries, going not only into PNMS management but also to the state governments and communities through various organisations.

Comments from those opposing the bill say that the benefits of the Palau National Marine Sanctuary far outweigh the short-term gains of re-opening.

The Ministry of Fisheries, Agriculture, and Environment (MAFE) reported during the hearing that the loss from fishing activities as a result of PNMS closure was US$1.8 million and that they have to look at how PNMS can make up that loss.

In 2019, Palau International Coral Reef Centre made a presentation to national leaders, including the House of Delegates, explaining the benefits both short-term and long-term, of the Palau National Marine Sanctuary. The presentation showed that Palau lost US$516 thousand from fish export tax due to the closure of the PNMS but gained US$70 million in grant donations in the first year.

The grants included a new patrol boat, a new marine law office, a new wharf, fuel for 10 years, and the salaries of Palau Marine Law Enforcement officers for 10 years. These were some of the gains Palau received in the first year of enactment of the PNMS law presented by PICRC, altogether worth over US$70 million.

Palau continues to receive around US$7 to US$8 million each year from the Vessel Days Scheme as a member of the Parties to Nauru Agreement (PNA) despite the closure of 80 percent of Palau’s EEZ to fishing. This is where fishing companies buy fishing days from Palau but fish in the waters of PNA member countries.

Those against the re-opening of the PNMS shared various ways to leverage PNMS to gain revenue and value for Palau to make up for any loss as opposed to opening it up for fishing again.

Those that showed up to oppose the bill include members of BOFI (local fishing corporation established with the assistance of the government promoting domestic fishery), Palau International Coral Reef Centre (managing arm of the Palau National Marine Sanctuary), Friends of the PNMS (NGO), a local start-up fishing company, Ebiil Society, Palau Conservation Society, Palau Chamber of Commerce, Palau Council of Chiefs, and other individuals who oppose the bill to re-open the PNMS.

Addressing the supporters of the bill during the afternoon hearing, House Speaker Sabino Anastacio said that none of the grant funds received through the PNMS goes to OEK, rather it goes through NGOs.

Anastacio complains that the Palauans working for the NGOs are getting paid more than those working for the government. “When the money comes, these are non-profit so we don’t see the paperwork. We don’t know how much goes to the [salaries] and where the rest of the money goes.”

A portion of the PPEF (Pristine Paradise Environment Fee) under the PNMS allocated to State governments dried up after the border closure. This US$100 fee paid by each incoming passenger is divided between state governments, green fees, and the Civil Service Pension Plan. The significant drop in arrivals impacted this revenue source.

The bill was introduced in the House of Delegates with 15 state delegates as introducers with the exception of Delegate Lee Otobed of Ngatpang State who did not sign the bill. “I had my objections and that’s why I didn’t sign it,” stated Otobed, but he did not elaborate his reasons.

The House of Delegates Ways and Means Committee’s invitation to the public hearing separated the opponents of the bill and the supporters into two separate hearings, one in the morning and one in the afternoon.

“We did this to allow everyone to be heard rather than have an argument on the floor between the pro and anti supporters,” explained HOD Ways & Means Chairman Delegate Mengkur Rechelulk.

Delegate Rechelulk said the purpose of the bill was to seek additional revenue for the country, given the current financial crisis.

Ngaraard Delegate Kanai said that they (delegates) have not made a decision yet and that the hearing was an opportunity to get public feedback on the proposal.

Moana Minerals Limited announces award of an exploration licence by the...