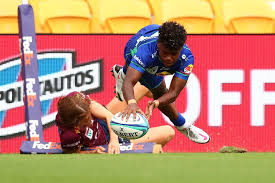 The Fijiana Drua have backed up their Super W debut with another impressive win, overcoming the Queensland Reds 27-12 at Suncorp Stadium.

The newcomers thumped Melbourne last weekend but knew they faced a stiffer task on Saturday when the Reds controlled the early stages and scored first through Ivania Wong.

The Drua had just 20 percent of possession in the first half as the Reds attempted to control proceedings with their scrum.

But the hosts couldn’t convert that to points, the Drua instead crossing twice when the chance presented before the break.

First Doreen Narokete outfoxed the Reds’ defence from close range after five-eighth Merewalesi Rokouono had charged down a kick.

Lethal winger Vitalina Naikore scored the first of her two tries to make it 12-5 at the break, before teammate Jade Coates barged over to begin the second half.

Naikore’s second was followed by hooker Vika Matarugu’s clincher to make it 27 consecutive points for the visitors.

“You give them an extra possession and they kill you,” Reds captain Shannon Parry said.

“We left a few points out there in the first half and couldn’t execute when we got that territory.

“They’re a quality team and they showed that today … we’ve got to be a lot more clinical”.

Ellie Draper scored a consolation try for the Reds, who moved to 1-1 this season ahead of a clash with the Brumbies next week.

The Drua play the Western Force next before an anticipated clash with defending champions the NSW Waratahs a week later.

“The girls did a good job, but more still to work on,” Drua captain Sereima Leweniqila said.