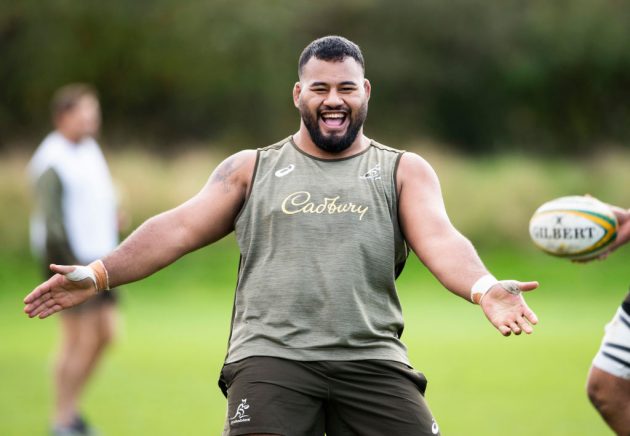 Taniela Tupou has cheekily challenged Rugby Australia to “show me the money” as the rampaging Queensland Reds prop switches gears and begins to ponder his future.

The ultra-talented Wallabies prop admits he’s yet to flick into 100 percent rugby mode less than a fortnight out from the Super Rugby Pacific season.

But he has reason to be distracted, the Tongan product was forced to wait almost a week until a 2 am phone call from a random number confirmed his mother and family had survived the country’s devastating volcano and tsunami disaster.

Until then he’d been distant at training and desperately concerned, given all he’d seen were photos on social media showing widespread damage across the country.

“I was awake, every night just hoping for a phone call or something and finally got it, so I went to sleep in peace,” he said.

“My mum’s village is fine, but my dad’s island is gone, nothing there, but it could be worse.”

Tupou has arranged a shipping container full of clothing, toys and basics to be sent home.

A Reds charity game raising money for UNICEF and a $500 donation to the Red Cross Pacific Tsunami Appeal for every tried scored in the first 10 Super Rugby Pacific rounds will also help the cause.

“I was going to put it up on Instagram, ‘don’t touch me, let me score, for my people,” Tupou grinned.

“It’s so good to see the rugby community helping each other … people are willing to help my little island country.

“You grow up with no phone, no nothing, so I’m sure some kids will appreciate some clothes, toys, books.”

Tupou hasn’t been home since 2019 and hopes to host his mother, who hasn’t seen him play live since 2018, in Brisbane soon to give them both “something to look forward to”.

“After a long season like last year I’d (usually) go home, forget about everything and come back fresh, ready to go,” he said.

“So I’m hoping to do that before the World Cup next year, that’ll be good for me mentally.”

What happens after that is on Tupou’s mind though, with his four-year contract due to expire after the showpiece event.

Tupou grew up in Tonga but moved to New Zealand in 2011, emerging as a potential All Blacks star before heading instead to Ballymore as an 18-year-old.

He said former Wallaby and current Tongan coach Toutai Kefu had been in his ear about returning home, an unlikely prospect given new eligibility laws require a three-year absence from Test football before the player is available for their country of birth.

“I said ‘Keps I’m Australian, I’m not Tongan anymore, leave me alone’, but after next year I’m off contract and I’m not sure … gold jersey or red (Tongan) jersey,” Tupou joked.

A lucrative stint overseas is more likely, Rugby Australia aware they’ll be competing with the riches of Europe for a man of Tupou’s talents.

“Show me the money – I’m joking … I’m not joking though – c’mon (Dave) Rennie,” Tupou smirked in a cheeky message for his Wallabies coach about another long-term deal.

“I’ve loved it, am so grateful for the Reds, they really trust me and I think I gave my all every year.

“This year, next year I’ll do everything I can to help this team win and we’ll see how we go after that.”