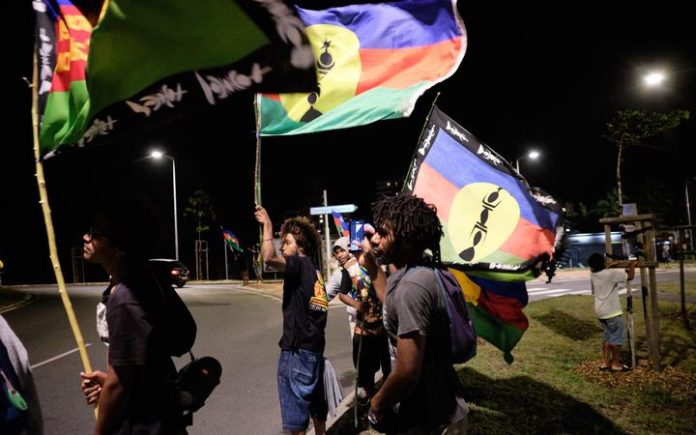 There is growing unease over the French decision to hold New Caledonia’s third and final independence referendum on 12 December.

Pro-independence parties and groups decided last month that because of the pandemic, they will stay away from the polls.

The decolonisation mechanism, at play for 30 years, will therefore reach its formal end without the full participation of the colonised people at the centre of the process.

With the expected overwhelming no vote, the referendum decision will put the onus back on France to find a new way to accommodate the Kanaks’ right to self-determination.

The December date for the referendum was chosen by the French overseas minister Sebastien Lecornu in June after he dismissed calls by the pro-independence parties to hold it in late 2022.

His position echoed the consensus that the referendum date should in no way overlap with the campaign period for the French presidential and legislative elections due next year.

However, the pro-independence parties had asked Paris to honour the 2019 promise by the then French prime minister Edouard Philippe to exclude the period from September 2021 to July 2022 for the referendum

While the anti-independence camp wasn’t keen on having another vote, its preference was a date as early as possible

The pro-independence side grudgingly accepted the choice by France and began readying itself for the third independence vote in three years.

Vaccinations have picked up and around 80 percent of the eligible population has had at least one jab, while about 70 percent have had two doses.

With community gatherings banned, the pro-independence parties saw their chances to reach grassroot voters dimmed and called for a postponement of the vote until late next year.

They also argued that for a population in grief, the time for political campaigning was not right.

But for Paris, the referendum machinery has been set in motion, with hundreds of security forces and their armoured personnel carriers on their way to Noumea.

Grief was not considered to be a reason to delay the vote, and Lecornu said only an out-of-control pandemic justified a postponement.

With case numbers falling, the pandemic was deemed to be managed and conditions fine for the vote to go ahead.

Failing to get any concession, the pro-independence parties let the deadline lapse to submit official campaign material and then announced they would not take part in the referendum.

Mayors in towns with pro-independence administrations have been asked to assist in the formality of running of the referendum but not to vote.

The Melanesian Spearhead Group, which has New Caledonia’s pro-independence FLNKS movement as a member, endorsed the call to delay the vote.

Vanuatu’s government also supports a postponement, while other governments in the region, including the Pacific Islands Forum, have remained silent.

Furthermore, Pacific regional statesmen, such as the former presidents of the Marshall Island, Kiribati and Palau, have written to President Macron asking him to show consideration and respect for the wishes of the Kanak people.

It is being pointed out time and again that the independence referendum imposed by France in 1987 failed because the Kanaks rejected the conditions attached to it.

With more than 98 percent then opting to stay French, it didn’t reflect the aspirations of the people colonised since 1853 and sidelined for the better part of a century thereafter.

A conflict simmering for years and on the verge of a civil war in the early 1980s had its most dramatic flashpoint in the 1988 Ouvea hostage crisis when both French police and hostagetakers were killed in operations controversial until today.

The crisis happened to reach its very peak as France was in the middle of its 1988 presidential elections.

It marked a turning point and ushered in a deal to try to achieve New Caledonia’s decolonisation peacefully.

Known as the Matignon Accords, a ten-year horizon was set for a proper vote, but again put off with the signing of the 1998 Noumea Accord.

Under the Accord, New Caledonia was given a collegial government, made up of members in proportion to their parties’ representation in Congress.

The electorate for provincial elections as well as the referendums was limited to indigenous people and long-term residents, and enshrined in the French constitution.

The Accord also saw the phased and irreversible transfer of power from France to New Caledonia as part of the decolonisation under the auspices of the United Nations.

What remains under French control, and is the substance of the referendum, is defence, policing, the judiciary, monetary policy and foreign affairs.

Also part of the realignment was the transfer of vast nickel ore deposits to the mainly Kanak Northern Province for it to partake in what is the backbone of the economy.

While these accords provided for a peaceful coexistence for three decades, they failed to unite the communities for the much vaunted common destiny.

Approaching a third and final vote, the anti-independence side has been keen for an early vote, warning that the prolonged referendum process has already created uncertainty in difficult economic times.

The pro-French loyalists also pointed out that it was the pro-independence parties, which in April asked for the referendum and which should now stand by their decision, irrespective of the arrival of Covid-19 in the community.

In July, France released a comprehensive document outlining what either a yes or a no will mean.

It also provides for a convergence period to June 2023 when Paris wants another vote in New Caledonia on its next status, whose elaboration looms as an enormous challenge.

With the French presidential election less than half a year away, time will be tight as attention invariably drifts towards French domestic politics which may even bring on another set of actors.

Missing in the lead-up to the December referendum, which is now all but certain to be a resounding victory for the anti-independence side, is any proposal which could be acceptable to both sides in order to maintain the peace.

Lecornu has said December 12th will see the Noumea Accord lapse. For the anti-independence side, this is being taken to mean the end of the restricted roll and the admission of all French citizens in future votes.

This risks setting an end to the concept of a New Caledonian people, made of indigenous Kanaks, descendants of 19th century convicts and long-term settlers.

It is clear that the Kanak people won’t accept that its right to self-determination will be voted away by recent migrants.

A flawed referendum in December will set the clock back and force the two camps to relitigate the terms for a continued peaceful coexistence.

Maybe the time will come for a New Caledonia with sovereignty shared with France.

12 out of 18 Vanuatu Constituencies wait in suspense as legal...