Home Breaking News We will track down those responsible in violent protest: Solomon Islands PM... 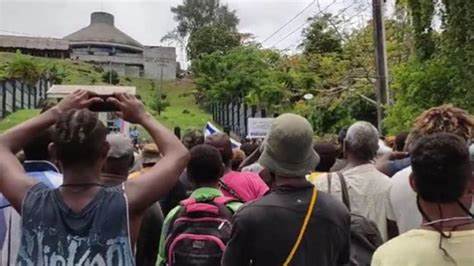 In a special nationwide address Solomon Islands Prime Minister Manasseh Sogavare says the government will track down those responsible for Wednesday’s protest and riots.

“The Governments investigative arm is working to track down those behind the destruction, they will face the law, no one is above the law.

“These people will face the consequences of their action, the symbol of our democracy was breached today,” the Prime Minister said.

“I had honestly thought we have gone past our dark days, today (Wednesday) has shown that we have a long way to go.

“Today I stand before you all, and say our country is safe, and government will continue to lead the nation.”

He said that the National parliament of Solomon Islands is a sacred institution. It represents an important symbol of our democracy.

“It is very sad that the symbol of democracy was breached today,” he said in a statement.

The Prime Minister said he has signed an order declaring a 36-hour lockdown starting at 7pm last night.

He said that the 36-hour lockdown will allow police to further investigate what transpired Wednesday.

Meanwhile, Police in Solomon Islands have used tear gas and rubber bullets to disperse large crowds that turned out in the capital Honiara on Wednesday afternoon demanding the resignation of Prime Minister Manasseh Sogavare.

Around 1,000 people gathered at the gates of parliament, where MPs are currently sitting, and schools closed early as a safety precaution.

Buildings were stoned and a traditional leaf hut next to Parliament House went up in flames.

“It was the tear gas that started the fire,” Kekea said.

One female officer was injured, she said, while several protesters were arrested.

Juanita Matanga, a spokeswoman for the Royal Solomon Islands Police Force, told a press conference that “a lot of people” had destroyed buildings in Honiara, including a police station.

“I’m really sad to see the behaviour,” she said.

“Whatever differences we have, there are ways that we can resolve these problems.”

Gina Kekea said it was likely that “the worst is yet to come”, with other Honiara residents joining the protests.

The Solomon Islands Herald reported that protesters later looted and damaged shops in Honiara’s Chinatown, and marched to the Chinese embassy.

Beijing opened an embassy in Honiara in September 2020, after the Solomon Islands shifted its diplomatic ties from Taiwan to mainland China.

The Premier of Malaita province, Daniel Suidani, has been a vocal critic of the cutting of diplomatic ties with Taiwan.

National government MPs from Malaita on Tuesday called upon Suidani and his government to urge their supporters not to commit acts of violence.

“Exercise your duty and moral obligation as leaders to uncategorically and unconditionally recall our people, our brothers and sons from carrying out such a potentially dangerous and violent actions,” the MPs said in a statement.

“We also appeal to our good people of Malaita to respect our status and blood-ties as fellow Malaitans and Solomon Islanders.

“Please remain in your villages and homes and refrain from being used by political opportunists taking advantage of your genuine frustrations to incite violence for their own end.”

Kekea said she had spoken with Suidani, who claimed the protests were “the result when the national government don’t listen to people.”

She said the frustration had begun with the switch of diplomatic allegiance from Taiwan to China in September 2019.

“There’s a whole lot of events that have happened along the way and it’s a combination of all those things put together that ended up this way,” Kekea said.

The ABC has been told that the Australian government is preparing to respond to any requests for support from Solomon Islands.

“The situation is evolving in Honiara with civil unrest,” said a statement from the Australian High Commission in Honiara.

“Please exercise care and remain where you are if it is safe to do so and avoid crowds.