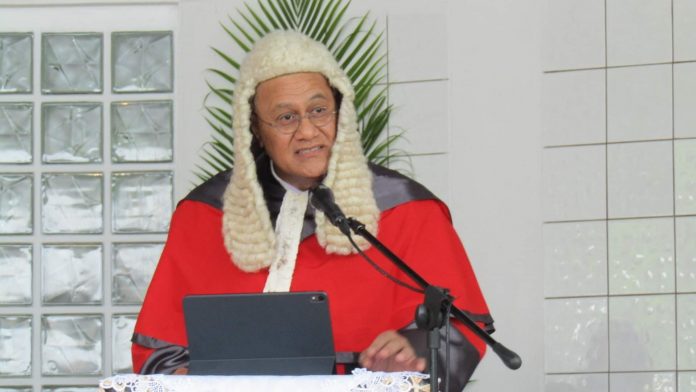 As by-election voters head to the polls Friday, the Supreme Court is reluctant to hand down orders on interpreting a constitutional clause requiring a minimum of 10 percent of MPs are women.

The Court’s concern was raised when the Office of the Electoral Commissioner (OEC) sought an explanatory ruling (declaratory relief) on how the constitutional quota for women MPs should be interpreted.

The Attorney General, Su’a Hellene Wallwork filed the motion on behalf of the Electoral Commissioner.

In essence, the Commissioner asked the court to explain if the relevant section of the constitution (Article 44) needs to be activated to ensure a minimum of six women sit in the legislature, how the calculation of the additional member would be conducted.

The court could either use results from the general election in April, this week’s by-elections or both.

But with pre-polling underway the court very firmly held its tongue on Wednesday in response to the Commissioner’s questions, refusing to play its hand on how or on what basis additional appointments to Parliament might be made.

The Court of Appeal has already ruled that the quota of 10 percent women MPs, when applied to the current 51-seat Parliament, would amount to six women. It has also been established that the Electoral Commissioner can only trigger the appointment after the final results are known when all petitions and by-elections are dealt with.

The Chief Justice, Satiu Simativa Perese said the Court has serious reservations about dealing with the matter when the by-elections for the constituencies have effectively started.

“Our concern is the Court not to do anything that may inadvertently influence the way which voters vote and exercise their rights,” said Chief Justice Perese.

He noted the by-elections for the six constituencies began on Wednesday and the Court should not interfere or influence the way people vote by dealing with the matter during the polling period.

Furthermore, he said the application should have been made at least a week or two weeks ago to allow the Court time to deal with it before the polling day.

The Attorney General noted the matter raised by the Chief Justice saying they are in the Court’s hands.

Su’a said she has already made discussions with other parties involved and have reached an agreement on what the appropriate interpretation of how the provision is applied.

“We can possibly file a joint memorandum for consent on this whether that would mediate the Court’s concern giving orders by consent otherwise it can be put on hold until after by-elections,” she added.

The Attorney General submitted that the Electoral Commissioner wants to get some clarity to avoid any dispute after the by-election which may influence how the case comes to Court.

“As the Court has already ordered in the Court of Appeal it is the Electoral Commissioner that must activate and exercise his powers and we anticipate for him to do that following declaration of results,” she said.

Justice Vui Clarence Nelson interjected that even if the Court makes an order by consent “a concern is still very much a concern.”

“We spring that on the general public at this stage when the election process has already been actioned – who knows what the outcome will be,” he said.

“We don’t know and that is our issue with the application. Even if we do that I don’t think it will advance…”

Justice Nelson also added that the agreement from the parties is premised on the fact that there would be no petitions arising out of the by-elections which is unknown.

“We don’t know whether at the end of this by-election process there will be petitions coming which may ultimately affect the factual balance and factual scenario of the activation [of article 44 (1),” he said.

He also raised the possibility of the parties changing their position on the application should the contest between the political parties come down to one seat.

Another issue raised by Chief Justice Perese is inviting the Court to agree on the application the parties have consented to would be a step too far.

He said the parties might agree on the interpretation of the provision but it might not necessarily be correct.

He suggested the best way to move forward is file the application after the results are declared so that the arguments are made in Court for everyone to listen to.

Aumua Ming Leung Wai the lawyer for HRPP agreed with the views from the Court.

He suggested that the Attorney General should consider withdrawing the motion for now.

The matter has been referred to civil mention on 29 November 2021.

Vote of no confidence in Niue Cabinet will be heard on...