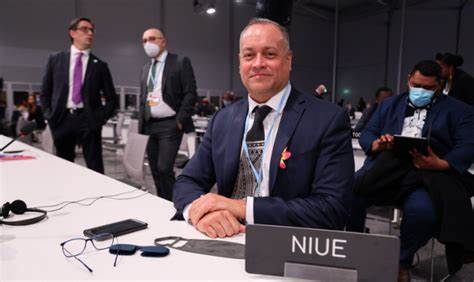 One of the world’s smallest nations is taking giant steps when it comes to addressing climate change. Niue has made bold commitments in its Nationally Determined Contribution (NDC) despite its greenhouse gas emissions being almost zero.

Niue’s solar energy currently provides 38% of its national power grid and its target is to achieve 80% by 2025.

The Pacific Island has also made a large contribution to the Ocean Climate Nexus, having designated 40%, that’s 127,000sq km of its sovereign waters as a Marine Protected Area. The global ask is 30%.

Having demonstrated its leadership, Niue now asks other countries to do the same.

“What we need is a bolder commitment to reducing emissions by the world’s largest polluters. Fossil fuel subsidies must be phased out and redirected to adaptation and mitigation efforts,” said Dr Dean Rex Niue’s Special Envoy at COP26. Dr Rex presented a statement on behalf of Niue as the high-level segment resumed.

“Niue calls upon the G20 nations and big business for greater commitments in their NDCs to meet the necessary ambition and to keep 1.5 alive.”

Having faced significant challenges in accessing climate finance for Niue’s National Adaptation Plans, the island nation calls for a simpler and quicker process to ensure climate programmes are not scuttled before they get off the ground.

COP26 was asked to support pathways that work for developing countries and to invest in sustainable finance mechanisms that take Niue’s absorptive capacity into consideration. This will help build Niue’s capability, incrementally.

“We need a clear path forward to operationalize the Global Goal on Adaptation (GGA). A path that is sufficiently flexible to reflect the unique contexts of individual Least Developed Countries and Small Islands Developing States, a path that supports locally appropriate implementation and does not increase the reporting burden,” said Dr Rex.

“This clear roadmap for the GGA needs to be set as an outcome for COP26.”

In recent years, Niue has experienced an increase in both frequency and severity of tropical cyclones suffering huge economic and non-economic losses. To mitigate these threats, vulnerable infrastructure has had to be moved and relocated at a great cost. Niue has called upon loss and damage to be addressed using not just insurance facilities, with exorbitant premiums the island cannot afford, but other creative financial instruments.

Nineteen years ago, the Premier Toke Talagi of Niue addressed the World Summit on Sustainable Development saying, “history and our children would judge us”, at COP26 the message from Niue was the same.

“As a global family we should have made much more progress by now so that no country should have to come to another COP and say that line again,” said Dr Rex.

“For decades we have heard promises of ambition and yet time after time there is no action, only targets and failed promises. We must achieve success here, not just for us but for our children and their children.”

Niue asks that COP26 not be remembered as just another COP and that decisions take into account the communities and the lives of people that live in Niue.

“This COP must be remembered as the COP that put humanity back on track towards keeping the 1.5-degree target alive.”

“In the end, you are free to choose but we all are not free from the consequences of your choices.”

Special Envoy of Niue to COP26 made the statement on behalf of Niue on 10 November 2021. The Twenty-Sixth Conference of the Parties to the UN’s Framework Convention on Climate Change is held in Glasgow from 31 October to 12 November 2021.

Australia welcomes Micronesia’s decision to rescind withdrawal from the Forum