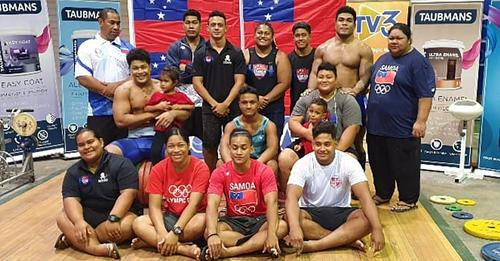 Weightlifters from Oceania have won titles and set records at their senior Championships, despite the fact that the competition was organised online.

It is the first continental Championships ever to take place online, and the first time results from a virtual competition have been officially endorsed by the International Weightlifting Federation (IWF).

The IWF approved the format in exceptional circumstances.

Because of coronavirus “every single country of the Pacific has its borders closed,” said Paul Coffa, general secretary of the Oceania Weightlifting Federation (OWF).

Travel in the region has been a huge challenge, and often impossible, for 15 months during the pandemic.

A few teams had to withdraw shortly before the Championships, including New Zealand and Niue, because lockdown conditions are so strict the athletes could not even go to a gym.

“An incredible amount of work was put in to this tournament,” said Coffa.

“The IWF established a system for the results to be officially registered and have these performances officially endorsed.

“We thank the Executive Board of the IWF for their understanding and consideration of the circumstances which affect our region.”

There were stand-out performances from Eileen Cikamatana of Australia and Don Opeloge of Samoa, whose nations were the strongest performers overall.

Rather than having to fly home after their exertions, the Samoa team – 11 of whom did enough to qualify for the Commonwealth Games next year – headed for the local beach for a “fun day” to wind down.

“After the fantastic results we achieved, it’s time to take a breather from training and relax,” said Jerry Wallwork, President of the Samoa Weightlifting Federation, in a local media report.

“It is part of their training to once in a while take time off and recuperate after an international event.

“They have made their nation proud with such an amazing outing at the virtual Oceania Championships.”

The competition, which ran over three days and finished on Sunday, featured the full quota of technical officials – juries, referees and marshals – and there were as many no-lifts and “bombouts” as there are at a typical in-person competition.

Anti-doping testing took place in the build-up, starting in Papua New Guinea out of competition, and all athletes were liable to be tested at their national hubs during the three days of action throughout the Pacific.

There was an electronic down signal that was both visible and audible, weigh-ins were visible and coaches were able to change weights via a dedicated portal as athletes lifted in different time zones “as if it was a face to face competition,” said Coffa.

Bowen Stuart from the Australian Weightlifting Federation, who has worked on virtual competitions around the world, “did a great job in coordinating the technical logistics,” said Coffa.

He said the special portal for coaches to make the change of attempt was a big success – something the IWF could consider to try to modernise the sport.

Stuart agreed, and said the handheld option for coaches to register changes would avoid the “scrambling around the table” behind the scenes that currently happens.

“I’m very happy with what we achieved,” said Stuart, whose system has been used in Latin America and the United States as well as Oceania.

“The IWF Board was very supportive – there was an acknowledgement that it’s better to do something than do nothing.

“Without their support, a lot of athletes are going to be missing competitions and that’s not going to help the sport.

“It doesn’t replace face-to-face weightlifting but it certainly adds another aspect to the sport, and virtual events can be very cost effective.

“Each time we run the events we get closer and closer to real life experiences and that’s a good thing for the sport.”

In the women’s events, Cochrane set Oceania records at 64 kilograms in the clean and jerk and total as she made 100-120-220.

Cikamatana, who will seek a special travel exemption to head to Italy for a month to prepare for the IWF World Championships in Uzbekistan in December, made 110-140-250 to win the 87kg.

Ioane’s record, by one kilogram, came in the 67kg clean and jerk.

Nobody in the heavier weight categories made more than Opeloge’s 359kg.