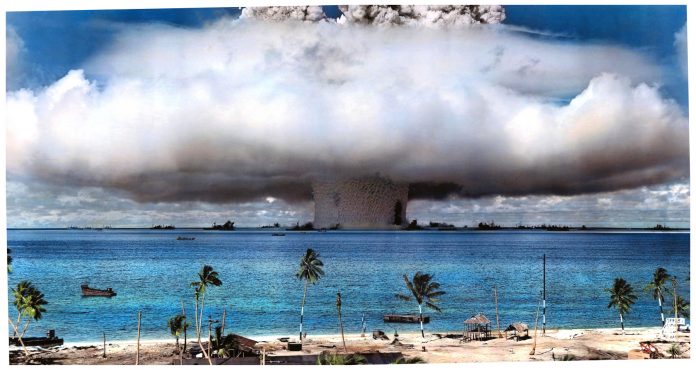 Eight years ago, the United Nations General Assembly declared 26 September as the International Day for the Total Elimination of Nuclear Weapons – but the Marshall Islands have been fighting the battle to have these monstrous weapons of war destroyed for far longer.

In 1954, Marshallese leaders petitioned the United Nations to halt the testing of nuclear weapons. At that time much attention was focused on the Marshallese, but no action took place. Instead of halting the nuclear tests that were taking place in the Marshall Islands, the United Nations adopted two Trusteeship resolutions that prolonged the nuclear weapons experiment.

The two Trusteeship resolutions 1082 and 1493, is the only time the UN authorised the detonation of nuclear weapons. Today, the Marshall Islands are still facing the decrementing after-effects of the nuclear tests.

Our nuclear legacy will have generational impacts. The Republic of the Marshall Islands is one of the few nations whose people have experienced the devastation of nuclear weapons exposure. We have raised awareness of human rights violations that have deeply affected us for decades. The negative effects that impacted our human rights, land, culture, and lives are a weight no other nation should have to face. There is still much progress to be done in terms of addressing nuclear testing impacts as well as overall eliminations of nuclear weapons. Through our advocacy, we hope to reduce nuclear risk.

Today, more than half of the world’s population still lives in countries that either have nuclear weapons or are members of nuclear alliances. There are around 13,080 nuclear weapons that still remain today. It is important that the international community takes steps to align to eliminate the risks posed by the existence of nuclear weapons.

The Republic of the Marshall Islands is still studying the Treaty on the Prohibition of Nuclear Weapons. We plan to participate in States Parties meetings as an observer. In particular, we plan to see what concrete victim assistance provisions actually come forward by States Parties and if they are at scale.