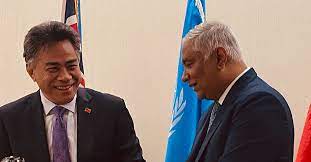 Outgoing PSIDS Chair, Satyendra Prasad, Fiji’s Ambassador and Permanent Resident to the UN announced that Samoa has assumed the role in a tweet on Monday.

Ambassador Prasad said it was his greatest honour to serve as chair.

“It has been my greatest honour to chair the Pacific Small Islands Developing States at the UN. On behalf of the Fiji Prime Minister and Fiji Ministry of Foreign Affairs I thank PSIDS for this honour,” he said in a statement on Twitter.

The chairmanship for PSIDS was handed over to the Ambassador Fatumanava-O-Upolu III on Friday, 10 September, 2021 at the UN in New York.

The ceremony was hosted by Fiji and witnessed by Permanent Residents of PSIDS to the UN.

Tonga was among the nations that attended the ceremony, according to a statement issued by the Permanent Mission of Tonga to the UN.

“Well done Fiji and the best to Samoa!,” the Tonga mission said on Twitter.

Tonga, they added, has chaired PSIDS twice in the past.