It was a rare moment given the upheaval and controversy the Pacific Islands Forum has faced in the last year or so.

Despite some earlier apparent hiccups with connecting, Whipps and his fellow MPS leader acknowledged the presence of the Forum’s controversial appointment, putting aside talk of denunciation and leaving the Forum family, to stand as one on the region’s climate change crisis.

The three were part of a high level panel lighting up the path to the COP 26 later this year, when countries of the world will gather – or some of them will gather—to negotiate whether or not this climate crisis will end well, or be the end of humanity. With science now backing the Pacific’s ongoing 1.5 to stay alive call from more than a decade ago, Tuesday’s plenary which was joined by New Zealand and the UK’s Ministers for Climate change, was another virtual hurdle for the Virtual Islands Innovation summit, organised by its founder James Ellsmoor and with a global following that has attracted world leaders, thinkers and major backers to the event.

For Tuesdays Pacific opening (another was help for the Caribbean islands, and more sessions are continuing this week), former U.S President Bill Clinton provided the welcoming remarks and support for the Pacific nations.

But it was the leadership of the Micronesia Presidents, speaking to the issues they know so well because they live them daily, which drew strong positive support in the virtual platforms chat columns. 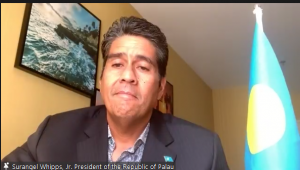 Palau, like all small island developing states has been faced with an exhilarating pace of global challenges. We have had to adapt to these environmental health and economic shocks, and are barely staying afloat,” Whipps told the online plenary, noting Palau’s enviable record of reaching herd immunity in July, and rolling out a pandemic certification programme. Even two cases detected at the border in August were isolated and vaccinated.

“We have truly opened with care,” Whipps said, announcing the nation will open up in February next year to host the global “Our Oceans Conference”.

But being home to globally renowned waters is also feeling the impact of climate change, and Whipps noted Palau, like other vulnerable islands of the Pacific, faces the harsh reality of climate.

“There is an obvious unequal distribution of benefits and burdens, as well as an uneven field of global policymaking on sustainable oceans. We must encourage and facilitate the fair sharing of the benefits of the ocean use and align our concerns for social equity with concerns of environmental sustainability,” he said.

“The growing negative impacts of sea level rise, displacement of communities destruction of infrastructure, and the loss of historical and cultural resources and the threats to food security require action. We must all work towards net zero in 2050. It’s time climate financing is made accessible to local communities so that we can all develop and implement climate mitigation and climate adaptation strategies.”

The strong call from Whipps took up where the focus from Puna summed up the bottom line: “For us in the Pacific, climate change is not a debate. It is a matter of survival and every day of inaction brings us one step closer to a perilous future which could well see many of our homes disappear.” 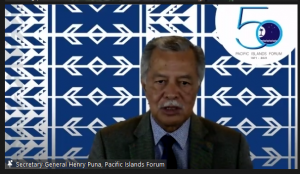 Recalling his own experiences as a pearl farmer, the Forum secretary general highlighted three key message, setting the stage for climate change reality in the Pacific; summing up regional action to combat the climate change crisis and implement Sustainable Development Goals; and sharing what the Pacific people must see “from governments and the global community within this decade. if humanity is to secure our collective future.”

“So what do we want to see from governments and the global community? In short, Urgent action, and ambitious action,” SG Puna said.

With the latest IPCC report pointing to the need for urgent action to avoid catastrophic impacts, Puna joined the opening call from RMI President David Kabua for the Kainaki Lua Declaration of the 2019 Forum Leaders to see traction at the upcoming COP26 this November.

In Glasgow, Puna, said, “we want to see real and tangible commitment to upholding the goals of the Paris Agreement. The Paris Agreement is not just a political tool – it is a roadmap for our very survival. The Rulebook must be finalised at COP 26.”

Describing the global talks and commitments of recent months as ‘insufficient’, Puna reminded the Virtual summit “we can have all the commitment and talk in the world, but without real, actual action, particularly by the wealthy and global major emitters, the world will surpass the 1.5-degree threshold within the next decade. This is not the future we want for our children.”

Like other Pacific nations experiencing stronger typhoons and cyclones as the years go by, RMI has been hit by the decimating shocks of a climate crisis it didn’t create. Focussing on the work of advocacy and unmet promises, Kabua called for a focus on the actual implementation of the Paris Agreement calling for financing of the US$100 billion commitment for climate adaptation.

“It is also important that the global community has a closer focus on the relationship between oceans and climate change. We are big ocean states. Oceans must be integrated into the UNFCCC practice process. The recognition of the ocean climate, biodiversity nexus entails that the production of one cannot be the expense of the other.

Kabua described the kind of bold ambition for oceans he is looking for. RMI is partnering with other nations to push for stronger emissions action at the IMO, with a carbon levy to fund research and help the most vulnerable islands of the world.

The Marshall Islands has also joined a new maritime boundaries declaration which sets the maritime borders under the law of the sea, to exist in perpetuity, despite sea level rise.

“We are committed to our collective efforts to ensure that as maritime zones are delineated in accordance with UNCLOS, they cannot be challenged or reduced as a result of sea level rise and climate change,” he explained.

“Rising sea level is a natural phenomenon threatening all island nations worldwide. This is a threat more catastrophe than this current pandemic,” he said.

“The RMI will not be idle, we will continue to take decisive actions—and we will join all efforts for a greenhouse gas transition to zero emissions by at least 2050,” he said.

For more information on the Virtual Islands Innovation summit you can log on https://islandinnovation.co/