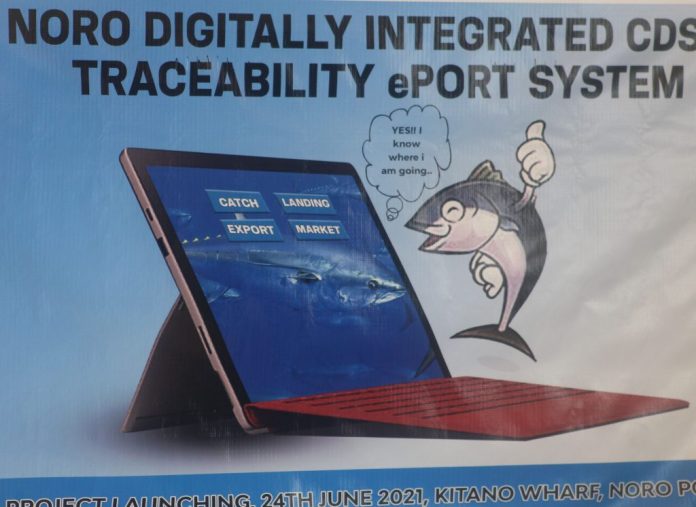 The Noro Port in the Western province of Solomon Islands has become the first e-port in the Pacific region, after launching a digitally integrated catch documentation and traceability scheme on 24 June.

The launch was a landmark for the Ministry of Fisheries and Marine Resources (MFMR), the local tuna industry, customs and health departments – it is the very first fishing port in the region to operate the Catch Documentation System (CDS).

For the Solomon Islands ministry, this is a new chapter in its effort to modernise how it processes data. The formal launch of Noro e-port programme no longer requires paper to record and store data.

Speaking at the launch event of the state-of-the-art system that will make fish accountancy more efficient, Nestor Giro, Solomon Islands’ minister of fisheries and marine resources described the Noro e-port project as a milestone achievement.

He said the project was a concept, which came about from the many challenges faced by the Ministry’s Noro-based compliance team in carrying out their duties. Their duties included the implementation of national inspection and CDS requirements, which are important to support the tuna industry at Noro.

“You would recall that, in 2015, Solomon Islands was ‘yellow carded’ by the European Union for not complying with the market requirements, which implies elements of Illegal Unregulated Unreported (IUU) fishing,” said Minister Giro.

The Ministry of Fisheries and its stakeholders, which included the National Fisheries Development, Soltuna and relevant government line ministries, responded by stepping up their effort to conform to the requirements of the European Union. This saw the lifting of the yellow card in 2016.

Minister Giro said it was the compliance team at Noro that worked tirelessly to ensure all requirements were met. This involved manual collection of data and information from landing to export (CDS and traceability) from paper to excel spreadsheets, which was time consuming and required more effort.

This gave rise to the need for a system that catered to the process of CDS and traceability.

The early development of the CDS scheme

In 2018, discussions were under way between the ministry and Dr Transform Aqorau, who was the brainchild of the new digitised system to integrate with Soltuna, National Fisheries Development and other line ministries involved in the process of CDS and traceability at Noro Port.

According to Dr Aqorau, iTuna Intel’s CEO, the development of the system has been a truly collaborative effort between officials of the MFMR, government IT services, the tuna industry, customs, health and iTuna Intel.

He said the energy put together in getting the project to where it was today, under the leadership of MFMR’s Permanent Secretary Dr Christain Ramofafia, has been commendable despite a few criticisms made towards the development of the system.

“There were also detractors who questioned the systems development but these made me even more determined to show that we are capable of developing a system to transform the fisheries operations at Noro,” Dr Aqorau said.

“These have all been important factors in shaping the success of the work that we are here to witness today. Perhaps we may have taken a leaf out of the book from the people from here who – in spite of the land disputes that have characterised the history of this region – have been able to arrive safely to this landmark development.”

The iTuna Intel CEO told the launch event that he was a proud man.

“I am so proud to be associated with the project through iTuna Intel, but it was colleagues in the MFMR, government IT services, the tuna industry, customs and health who made it happen to be the first. It is just the beginning and we look forward to more strategic partnerships to build on what has been developed using local resources. We want to have smart ports, and to do that we must invest in our people to embrace emerging technologies to better manage our fisheries.”

Dr Aqorau said the Solomon Islands tuna industry is fortunate that its partners appreciate the importance of having a comprehensive digital traceability system to monitor the legality of their products ‘from catch to plate’. They, more than anyone, appreciate the value of being able to demonstrate that they fish sustainably and legally – this is what the global tuna market demands.

“The Solomon Islands Government also has coastal and port state responsibilities to ensure the fisheries are sustainable and that fish landed at Noro is not caught illegally. Thus, there is a mutual interest that the government and the industry share in making Noro a smart port – the ‘Port of Tomorrow’ –that has a transparent fit-for-purpose traceability system which would allow for full accounting of the fish landed, processed and transshipped through Noro,” added Dr Aqorau.

During the ceremony, Minister Giro acknowledged the new CDS as a home-grown initiative which was developed without any outside technical assistance.

Dr Aqorau also revealed in his speech that the origins of the project might be traced to a discussion on the floor of the first fisheries office at the Noro Town Council premises between key stakeholders about how they could improve and streamline the processes at Noro.

“The investments in the e-Port have taught us many things, but the most important is that it is ‘our system’, entirely developed as a home-grown system that we have built on our own – and for that, Minister, we can all be proud and deserve to celebrate the occasion,” he said.

“No one else, to the best of my knowledge, has built an integrated digital traceability system for a fishing port, and therefore I fervently believe that the time we have spent on building the system makes us just as competitive as any other developers in the world.”

Dr Aqorau says COVID-19 has therefore been a blessing in disguise, in a sense, “because it has made us reach deep within the means that we have to build a fit-for-purpose system which transforms Noro into a smart fishing port, a fishing port that sets the benchmark for the application of the best international [standards] that can withstand any independent audit.”

According to Minister Giro, the launch marked the completion of phase 1 of the project, which “includes the administrative work between government’s [IT services] and MFMR to identify a developer, develop a system, and test and trial the e-port system.”

“Trials of the system have been done and now we will witness how data is being transferred from the port into the system using this cutting-edge technology,” the Minister said.

Minister Giro had also revealed that phase 2 talks are currently underway with the Forum Fisheries Agency (FFA) to secure their assistance towards the project.

Speaking on behalf of the FFA Director General, Director of Fisheries Operations at FFA, Allan Rahari congratulated the MFMR and stakeholders for the home-grown initiative.

“The positive progress made so far has demonstrated your collective commitment to embrace technology through this paperless, interconnected and integrated e-port system capturing both port state measures and CDS activities. So, well done to the ministry and stakeholders for progressing this project to achieve the milestone we are celebrating,” Rahari said.

He said he was pleased to note that the development of the project was championed by local expertise without external advisors.

“This is a significant point worth highlighting. We must recognise, acknowledge and use the expertise we have locally to our advantage. So this is one of the hallmarks of this project – the use of local expertise,” said Rahari.

He also highlighted that the success of the project as a model could be replicated in other ports in Solomon Islands or the region.

“This project is a ‘model project’, as its objectives are in line with the Regional CDS Framework recently adopted by the Forum Fisheries Committee in May 2021.”

He has stated that the FFA stands ready to work with the ministry to progress the next phase of the project.