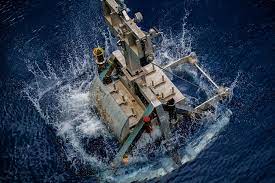 Pacific Regional Civil Society groups today accused DeepGreen, a venture capitalist company, as the real beneficiary of the Nauru Government’s decision to trigger the start of a process which could lead to potential widespread seabed mining in 2 years’ time.

The trigger, a clause within a 1994 Agreement on implementing Part XI of UNCLOS allows sponsor states such as Nauru to jump-start the mining process, by invoking a rule that sets a deadline for the finalisation and adoption of globally negotiated mining laws and regulations. In the event the global community fails to agree to mining laws and regulations, DeepGreen or its Nauru subsidiary NORI can proceed to mine based on work plans submitted.

The decision to start the two-year clock ticking is a sovereign decision. However, the Pacific collective believes the Nauru Government has been persuaded by DeepGreen to take this action on the pretext that the urgency of the climate crisis demands the commencement of mining in two years, without regard for the potentially wide-ranging environmental damage arising from deep sea mining (DSM). The damage could see the Nauru Government, future administrations, and Nauruan people face liability for environmental consequences that cannot be foreseen or appreciated at this stage

Last week, in media interviews pushing for a rapid opening of the seabed through pulling a trigger, DeepGreen dismissed the increasing scientific knowledge about the deep sea and its biodiversity, as well as the risks to ocean health from seabed mining. In the same week, over 300 scientists voiced their support for a moratorium on DSM. Prior to this, major brands BMW Group, Google, Volvo Group and Samsung SDI signed a pledge not to source deep seabed minerals. The European Parliament also called for a moratorium on DSM. Here in the Pacific, the collective has called for a total ban on DSM.

In the Pacific, one of the major concerns is the impact of mining upon coastal communities. Deep seabed mining would likely cause massive sediment plumes that could affect crucial tuna and other fish stocks, thus further destabilising livelihoods for hundreds of thousands of ocean dependent people and communities.

The Pacific Ocean is already under mounting pressure from human activities and the impacts of climate change, and there is substantial evidence that we need to now be embarking on an era of restoration, not further reckless exploitation. Those who are swayed by the false promise that deep seabed mining is a ‘green’ and attractive investment proposition need to think again and listen to the science. It is simply not the case.

Based on the best scientific knowledge available, scientists predict deep sea mining will cause irreversible harm to the environment, including to species, habitats, ecosystems and critical ecosystem functions and services.

While the economic gains promised by DeepGreen and other potential investors remain highly speculative and unsubstantiated there is real danger of a domino effect occurring, in which other states will follow Nauru’s lead, with potential Oceania-wide impacts on our people, nature and economies.

An aggressive push by any industry player to fast-track the conclusion of 7 years of ongoing global negotiations on the mining code can only be seen as a naked attempt to highjack and undermine the prospects of achieving the most stringent standards and regulations for the extremely risky experimental activity of mining the deep seabed.

In March this year, in order to list and sell shares on the New York Stock Exchange, DeepGreen merged with a newly formed, New York-based ‘special purpose acquisition company’ (SPAC) named Sustainable Opportunities Acquisition Corporation (SOAC) to form The Metals Company. A Cayman Island registered company, SOAC claims to have environmental, governance and social credentials. SPACs are shell companies, formed solely for the purpose of raising capital in an initial public offering (IPO), and using the proceeds to acquire or merge with another, unspecified company, to raise more money.

By pulling the trigger it is likely that the value of DeepGreen’s stock will increase allowing for the possibility of DeepGreen selling up and making a massive profit, leaving Nauru potentially with a damaged global reputation and liabilities it can ill afford.

Venture capitalist seabed mining companies are not new in the Pacific. The now bankrupt Nautilus Minerals Inc. secured a license from Papua New Guinea to mine the seabed in PNG’s EEZ under a controversial co-financing arrangement. This left PNG with a debt of AUD153 million when Nautilus went into receivership. It should be noted that the founders and CEO of DeepGreen were centrally involved in Nautilus.

Historically, Pacific Island states including Nauru have shown leadership in securing oceans protection, ending nuclear testing, banning driftnet fishing and bottom trawling, and more recently, as global voices on the oceans and climate fronts. We call on Pacific Island states to affirm their guardianship of our Ocean and resist the lure of wealth promised by companies that seek to plunder the deep seabed.

While the ISA is unclear about how it will deal with such a trigger, the fact that the process has been commenced will only intensify growing public concerns around DSM and oceans governance. In light of the current push to limit the timeline for proper and full negotiations, the Pacific CSO Collective re-affirms it’s call to ban DSM in the Pacific and globally.