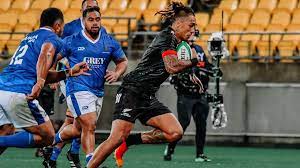 A rusty Samoa suffered a setback at the start of their preparations for next month’s World Cup qualifiers against Tonga when they were trounced 35-10 by the Maori All Blacks on Saturday in a blustery, wet Wellington.

It was Samoa’s first international since the 2019 World Cup while most of the New Zealand Maori were battle-hardened from playing in the intense Super Rugby Aotearoa and Trans-Tasman competitions over the past four months.

Played in an empty stadium, with Wellington under strict crowd restrictions after a tourist tested positive for Covid-19 after visiting the city last weekend, the match was competitive for the first 30 minutes when the scores were locked at 7-7.

But Samoa’s limited preparation and the inclusion of seven new caps began to show in the countdown to half-time when the seasoned Maori side scored two further tries to turn with a 21-7 lead.

“We’ve been together for about seven days now and were able to put together a decent start, a building block for us, and hopefully you’ll see the fruits against Tonga.”

The match lacked the traditional free-running flair of Pacific island teams which Maori All Blacks captain Ash Dixon put down to the inclement weather.

“We wanted to take them on upfront just because of the conditions but we would’ve loved to have a dry ball and play a bit more expansive and see both teams throw it around,” he said.

Samoa play the New Zealand Maori again next week in Auckland as a curtain-raiser to Tonga taking on the All Blacks in the first of their two warm-up matches before the two Pacific island sides clash for the vacant Oceania berth at the 2023 World Cup in France.

Tonga’s journey to Rugby World Cup 2023 to continue at Sunshine...

Teams given warm welcome to Rugby World Cup 2021 in New...