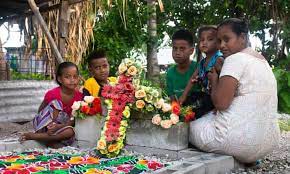 In his last email to his family, Eritara Aati Kaierua told them he loved them and apologised for not being in touch sooner. “Fish is a little scarce or maybe this location is not fertile, we are now fishing in Papua New Guinea and we are still here,” he wrote to his wife, Tekarara, on 21 February 2020.

“Please try to stay well … and I will try my best to stay healthy from here too,” he wrote.

Almost two weeks later, the 40-year-old father-of-four was found dead in a cabin on the Win Far No 636, a Taiwanese-flagged fishing vessel that by that time was in waters off Nauru.

An initial pathologist’s report said the independent fisheries observer had died of “severe traumatic brain injuries” and police in his home on the Pacific island nation of Kiribati, where his body was brought, opened a murder investigation.

But over a year later, Tekarara is still waiting for answers from the investigation she was promised.

The death of Kaierua, who was employed by the Kiribati Ministry of Fisheries, is the latest in a string of observer deaths and alleged abuses around the world that attract scant attention, and few penalties.

Being an observer, which involves monitoring fishing practices and catches to make sure boats follow the rules, is a dangerous job that can put observers in conflict with the crews on the vessels on which they are working, often hundreds, or even thousands, of kilometres from the nearest port.

According to the Association of Professional Observers, there have been over a dozen cases of observers dying on the job since 2009 alone, including three involving Kiribati nationals.

There was Antin Tamwabeti, who according to the company that hired him was harassed and threatened by the crew of one Taiwanese-flagged boat shortly before his death. He died on another boat in May 2019, in circumstances which have not been reported, though his case was ruled a suicide.

Moanniki Nawii died in 2017 on board a Taiwanese-flagged purse seine vessel; his family is still attempting to get an autopsy from authorities.

Then there was the 2009 death of Tabuia Tekaie.According to a New Zealand media report months after he died, the crate containing his body was at one point dropped into the sea when the captain of the Korean-flagged vessel attempted to transfer it on to a police boat. The cabin where he died had also been made “scrupulously clean” after his death thus obliterating any evidence, according to a New Zealand detective sent to Kiribati to investigate. The media report said that a subsequent autopsy found Tekaie’s death was not suspicious and his body was returned to his family for burial.

‘He feared for his life’

Kaierua’s sister Nicky was in Solomon Islands when she heard about his death.

“The initial words we heard is that he didn’t turn up for dinner,” Nicky said, “and when they [the crew] check on him, he was locked in his room, but his body was found on the floor and that he had died like that.”

Later, in a report for the UK-based NGO Human Rights At Sea, Tekarara recalled what the pathologist said to her immediately afterwards. He suggested that the injuries could not have been the result of a fall and implied that the cause of death was homicide.

She added: “I sobbed so severely thinking and imagining the pain he went through, how he had struggled to fight for his life, and what could have been the last thoughts on his mind before he lost his life. I felt sorry for him so badly knowing he was alone and had no means to call for help.”

Nicky said her brother had told her that his job was not easy and there were times on other vessels when he feared for his life. She said he recalled being offered a bribe onboard a different ship and of another incident in which he said his log of the boat’s catch differed from the captain’s log.

“He feared for his life and safety on that trip after the incident. The vessel was penalised, it was made to unload tonnes of fish in Tuvalu,” Nicky said.

She never asked what vessel it was, but she said afterwards her brother told her that he became scared of being poisoned on board and so would take the food served to other crew members.

“Most times he ate his own noodles from his own cabin. He was relieved to come home after that,” she added.

Concerns about the investigation

After his body was returned to Kiribati and the autopsy performed, the ship was impounded and two crew members detained and questioned.

But then progress on the investigation ground to a halt. Though the high court refused an application by the ship’s owners to have it released in June, the Win Far was allowed on its way in October. It is not clear who authorised the release when the investigation into Kaierua’s death was still ongoing.

The family had numerous other concerns about the investigation, not least the two further pathology reports that were made without examining Kaierua’s body and which reportedly concluded that he died of hypertension, or high blood pressure.

The family has not so far been allowed to see any of the pathologists’ reports.

In its report, HRAS also noted that nothing further has been heard about DNA samples taken from the crew, devices including phones, cameras and laptops that were seized from them or CCTV footage that was taken from the Win Far for analysis.

Tekarara has serious health issues and without her husband’s income, she is struggling to support herself and the couple’s four children, who are now aged between 11 and three years old.

“The younger kids used to ask about their dad, especially the youngest two. Each time a plane flew above, [the youngest son] Tutu would point up at the plane and yell ‘Daddy Daddy!’” Tekarara said.

‘More of a tool than a human being’

Liz Mitchell, president of the non-profit Association of Professional Observers (APO), said that Kaierua’s death is typical of a fisheries observers’ case, in that often there is very little information about what happened, and that if there is any investigation at all, it is an incomplete one.

“[Observers] are always the last considered. Like an afterthought – more of a tool than a human being,” Mitchell said.

“They are used to give the appearance that a fishery is being properly monitored. This is evident in the fisheries that are using observers to check off on MSC [Marine Stewardship Council] standards in order for the vessel to get MSC certification. If the observer doesn’t check off what the vessel positively reports as truth, they endanger themselves and certainly, the way the trips are managed, this contributes to their endangerment.”

Mitchell said it was “not only the fishermen that observers have to face dangers from but also their own employers, who neglect and knowingly place them in harm’s way without any protections, without any enforcement and without any reporting of the treatment they receive.”

According to the Pacific Islands Forum Fisheries Agency (FFA), of which Kiribati is a member, “observer safety is a matter of utmost importance for FFA members”.

But Tekarara said her husband’s death could have been prevented if money had been spent on two-way communication devices to protect him.

In fact, according to Mitchell, New Zealand gave Kiribati two-way communication devices but they never made it to the observers they were meant for.

“Kiribati absconded with AUD$26,000 (UD$19,517) in equipment specifically earmarked for observers – which could have possibly saved Kaierua’s life – and New Zealand didn’t care,” she said.

A spokesperson for New Zealand’s Foreign Ministry confirmed it had provided funding for the purchase of two-way radios, without specifying when, at Kiribati’s request.

“In this particular circumstance, the procurement of equipment and management of fisheries personnel is a government of Kiribati responsibility,” the spokesperson said.

Kiribati’s Ministry of Fisheries did not respond to requests for comment.

David Hammond, chief executive of HRAS, said Kaierua’s family deserved justice but that with the lack of evidence, “we are never going to probably see the truth to this case”.

“There is impunity and a lack of enforcement, and a lack of accountability, [which] breeds an environment where labour rights abuses can continue,” Hammond said.

Kaierua’s family is not giving up either.

“We are still waiting, and we are still needing justice, it’s been a year now, and still don’t know the answers.”.