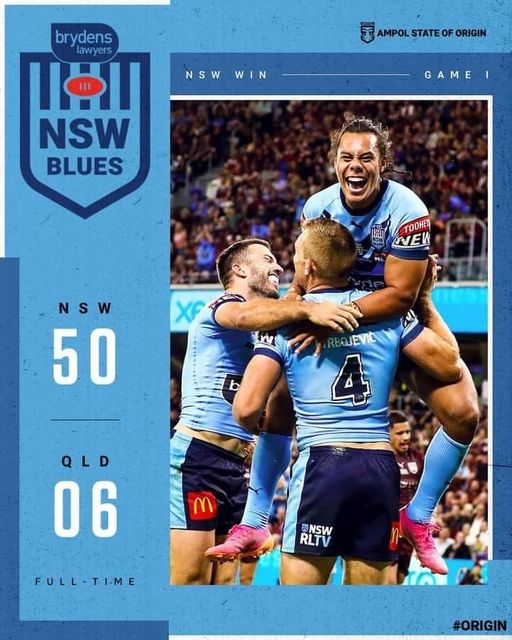 In front of a raucous sell-out crowd in Townsville, Brad Fittler’s men took charge with a three-try blitz in nine first-half minutes, sending them to the break 20-6 ahead.

And there was no way back for a Maroons side run ragged, conceding another five tries in the second stanza as the Blues scored 50 points in an Origin game for only the second time to secure their biggest ever winning margin.

“That’s pretty crazy,” said NSW skipper James Tedesco. “We knew that if we worked together as a team we could put in a really good performance, but 50 points, that’s really pleasing.”

Victory was a big step in NSW claiming back the shield they lost last series, when they slumped to defeat as heavy favourites.

The game Wednesday was supposed to be played in neutral Melbourne but a coronavirus outbreak forced a venue change to Townsville in northern Queensland, giving the Maroons home advantage.

But despite the 27,000-strong crowd barracking hard for Queensland, the Blues, spearheaded by a heavy Penrith Panthers contingent, ruined their night.

“That hurts a fair bit mate. We just didn’t give them what we hoped,” said Queensland captain Daly Cherry-Evans. “We’ve got to shrug it off. We’ve got to.”

Nathan Cleary put the Blues on the board first, nailing a close-range penalty.

They applied all the pressure, with an inevitable try coming after a needless obstruction on his own line by Kyle Feldt handed possession back to NSW and Trbojevic swooped over.

With the Maroons on the ropes, they crossed again on the back of a piercing run from Damien Cook, with young winger Brian To’o claiming the points in the corner.

Roared on by the home crowd, the Maroons fought back with Kurt Capewell getting a try to give them a glimmer of hope heading into half-time.

But the Blues were sensational, stretching their lead when Latrell Mitchell collected a clever grubber kick to dot down before they grabbed a fifth try after a beautiful move finished by Trbojevic.

Mitchell added his second soon after, then Daniel Saifiti got in on the action with Trbojevic earning a hat-trick to reinforce their dominance. Cleary converted seven of the tries.

Queensland captain Dale Cherry-Evans said: “We have a lot of improvement left in us.”

The Maroons will have a chance to show that in the second match of the best-of-three series on June 27 in Brisbane, followed by the final match on July 14 at the Olympic Stadium in Sydney.

Queensland’s series victory last year was the state’s 22nd victory in 37 series against the Blues.

‘Can’t keep them all’: Cleary resigned to Kikau’s pending exit

Viliame Kikau’s rise to stardom will melt your heart