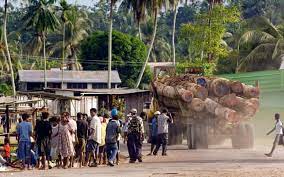 Guardian analysis of trade data has revealed that China received more than half the total tonnes of seafood, wood and minerals exported from the region in 2019, a haul worth $3.3bn(US$2.54 billion) that has been described by experts as “staggering in magnitude”.

The country’s mass extraction of resources comes as China has deepened its connections with governments across the region, amid a soft power push that sees it rivalling the influence of the US and Australia in the Pacific.

China took more by weight of these resources from the Pacific than the next 10 countries combined, with experts saying China “would easily outstrip” other countries, including Australia, when it comes to “gross environmental impact of its extractive industries”.

Shane Macleod, a research fellow at the Lowy Institute, says that China is such a dominant customer of Pacific resources because of its proximity to the region and its need to power its economy.

“They just have the appetite. They have the need for natural resources and they’re looking for sources and the Pacific is geographically close. It has the added benefit that the supply lines are shorter,” he said. “So you can look at the Ramu nickel mine in Papua New Guinea. That is providing raw material for China in the region, directly, without having to be transported from the other side of the planet.”

Beyond direct imports of resources, data from the American Enterprise Institute shows more than US$2bn was invested by Chinese companies in Pacific mining in the past two decades. These include investments in the controversial Porgera, Ramu Nickel and Frieda River mines in PNG.

The Chinese government has also sent billions of dollars in official finance into the region, including tens of millions for new marine and industrial zones.

China is the Pacific’s biggest customer whether measured by weight or US dollars. But Australia is close behind when measured in value – $2.8bn(US$2.15 billion) to China’s $3.3bn(US$2.54 billion) in 2019. This is due to the fact that many extractive products are heavy but relatively inexpensive commodities, like wood.

“In terms of the gross environmental impact of its extractive industries, China would easily outstrip other industrial nations that operate in the Pacific region, including Australia,” says Prof Bill Laurance from James Cook University in north Queensland.

Papua New Guinea, Solomon Islands, Vanuatu, Tonga and Palau all regularly send more than 90% of their wood exports to China. China’s size doesn’t neatly explain this concentration, as it takes less than 10% of the wood exported by Malaysia, a much larger producer. Malaysian companies also dominate logging in PNG and Solomon Islands.

According to some estimates, illegal timber makes up as much as 70% of logs exported from Solomon Islands.

As a very large and nearby country, China is a natural customer for the Pacific’s exports. But experts say the outsized take also has to do with China’s lack of laws against importing illegal timber, and poor accountability for environmental or social impacts.

“Both [Papua New Guinea and Solomon Islands] suffer from entrenched endemic corruption that has made it (so far) impossible to hold to account both the logging industry and the politicians profiting from them,” says Lela Stanley, a policy adviser at the NGO Global Witness.

“They are known high-risk timber producers, and countries with more stringent laws on illegal timber should avoid them accordingly. Currently China has no law explicitly forbidding the import of illegally produced timber.”

The logging that takes place in the region has huge impacts on communities.

“Most of those logs have been produced illegally, often … through the violation of land rights. This is not an abstract concept in PNG but one with real-life impacts for countless people across the country. Most rural communities depend directly on their land and forests for at least some of their needs. When that forest vanishes, or is stolen, the impacts are severe.”

While China’s new forest law, which came into effect in July 2020, aims to promote sustainable trade of timber, as well as to safeguard China’s forests, there are still concerns about some companies’ practices.

“Even if the laws and rules change, it will take time and effective enforcement before the companies change behaviour,” Stanley says.

Kiribati, for instance, receives up to 75% of its government revenue from fishing access fees and levies. But Kiribati directly exports very little – just 1,000 tonnes of seafood were exported to China in 2019. Foreign-flagged vessels, meanwhile, landed hundreds of thousands of tonnes of fish in Kiribati waters.

A survey of boats operating in the Pacific in 2016 found that Chinese-flagged vessels far outstripped those of any other country. China had 290 industrial vessels licensed to operate in the region at the time, more than a quarter of the total, and more than the 240 from all the Pacific nations combined.

Outside of PNG, little of the offshore fishing in the Pacific is conducted by locally flagged ships. Rather, local fishing is concentrated in coastal waters. There are highly valuable species in these waters, according to Dr Hugh Govan at the University of the South Pacific, such as sea cucumbers. But Govan says many coastal fisheries are overfished or commercially extinct.

The main market for sea cucumbers is southern China, but these were overfished to such a degree in PNG that the government had to halt fishing for several years.

“We have … strengthened international cooperation, and done a great deal of fruitful work in jointly combating illegal fishing and promoting the sustainable development of fishery resources with other countries.”

Measured by weight, Solomon Islands sends almost all of its mineral products to China, much of it aluminium ore.

Minerals account for more than 90% of the value of PNG’s total exports, and it sends just over 30% by weight to China. Australia is also deeply involved in mining in PNG – controlling many of the largest mines, and importing $2.5bn(US$1.9 billion) of gold in 2019.

Australia takes almost 100% of the gold from Fiji and about 80% from PNG. But when measured in weight these pale compared with the minerals exported to China.

But the Lowy Institute’s Shane McLeod, argues that a significant difference between Chinese and Australian trading partners is how accountable companies are held for environmental and social issues.

Large-scale mining operations in PNG have a horrific environmental track record, including disposal of mining waste at Anglo-Australian BHP’s Ok Tedi mine, at Anglo-Australian Rio Tinto’s Panguna and, more recently, at the Chinese-operated Ramu Nickel mine. Many foreign-owned companies have subsequently withdrawn from projects that have proven environmentally ruinous.

“But Chinese companies operating abroad aren’t subjected to scrutiny from their home markets in the same way as companies from western nations are,” McLeod said.

“Ok Tedi is a good example – the environmental disaster was a cause of major embarrassment for [BHP], with scrutiny from media eventually fed through to investors.”

“Companies with a Chinese listing/investors do face pressure and scrutiny, but I think the way that manifests itself is opaque and unseen. It’s not clear to what extent an environmental issue would limit the operations of a resource project, for example.

“I expect feedback for MCC [the Metallurgical Corporation of China, the operator of Ramu Nickel] comes through a political/governmental channel rather than, say, a journalist from China covering the environmental impact of a mine there.”

China’s foreign ministry did not reply to the Guardian’s requests for comment.

Last year the PNG government cancelled the mining lease of the part-Chinese owned Porgera mine, claiming that the country was not getting its fair share of major natural resource projects. The Chinese joint venture partner, Zijin Mining, “has flagged international political ramifications, warning the lease dispute could damage bilateral relations between [PNG] and China”.

The next test of corporate social responsibility may be on the horizon, with proposed mines from both Australian and Chinese companies in PNG facing pushback for environmental and cultural reasons.

Solomon Islands Opposition warns country should not be on the grounds...

Reflections of the Pacific Oceans Commissioner on the state of Blue...