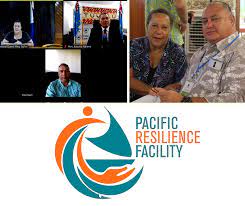 Founding director of Fiji Art and Soul, Shiri Ram, has taken out the top prize of FJD$3,000 (US$1,500) for a logo brand which will go global thanks to the Pacific Islands Forum.

The Forum has been talking for a few years about a new Pacific Resilience Facility(PRF) to help communities access small grants to build community halls and weather proof venues from disasters before they strike.

Their prospectus, launched today with a new logo designed by Ram, is now going to lead into a global pledging event to help raise the US$1.5 billion needed for the Facility to earn interest, which will fund its grants of US$200,000 for Pacific resilience work.

Ram’s design in a blue/green and orange features key elements and symbols inspired by a working trip to Kiribati early last year. It was there, he told viewers at the livestream event hosted today on facebook, that he “was given the privilege to actually talk to people who are on the frontlines of climate change. The people who have been affected.”

Ram said the stories of climate resilience, shared firsthand, played a big part in the inspiration he received to create his winning logo—“as well as, of course, the importance of the Facility.”

The PRF logo features on the prospectus document which provides details of how the facility will be managed, what makes it different from other climate financing mechanisms available to the Pacific nations, and the independence it will gain once the Forum sets up its management body.

A canoe representing the people of the Pacific is a central part of the circular two-colour logo. Within the waves which surround the canoe is a hand guiding and supporting its journey, which for Ram is the influence of the funding from the Facility. Blue waves represent rising sea levels, with a reaching over the waves and towards the canoe, representing people and human resilience.

Announced by Garth Henderson on behalf of the Forum Working Group for the Facility, Shiri’s entry was one of 95 entries received from Pacific creatives across the Forum member nations. “It was a difficult task for the Panel of Judges to arrive at the wining logo, because all entries were creative, and resonated with the fundamental issue which the PRF will address – building resilience of vulnerable communities in the Pacific against disasters,” said Henderson, who is the Secretary of Finance in the Cook Islands.

He said the chosen logo stood out amongst all the entries as it “best reflected the essence of the PRF.”

Henderson noted the three year journey of the PRF, when it was first proposed during Economic Ministerial meetings.

He said it was important that the regional financing facility for the Pacific to build resilience for communities, had to avoid adding to the debt burden faced by countries, and had to developed and driven by the Pacific.

Providing easy access, niche funding as opposed to the challenges countries face in accessing large scale climate finance, the PRF needed to be set up quickly to address what Henderson said was a common financing problem of the region.

In their comments opening the livestream event, both the Pacific Islands Forum Chair, Tuvalu PM Kausea Natano, and Forum SG Dame Meg Taylor, stressed there was no time to wait, and no time to lose, to move the PRF towards reality. Despite global economic impacts from the COVID19 pandemic taking their toll, they say traditional development partners to the Pacific, are going to be part of the fundraising pledging event later in 2021.

“As our Forum Leaders often remind us, climate change is the single greatest threat to our Blue Pacific region. Each year, more frequent and severe cyclones, floods, and king tides bear down on the Pacific, wreaking devastation and winding back years of development gains. Economic losses from climate-induced disasters are higher in the Pacific Islands than anywhere else,” said SG Taylor.

“At the same time, this is further exacerbated by the crippling health impact of COVID-19 and the fragile economic wellbeing of our people and region, highly vulnerable to recurring disasters. Some Forum Member countries are still recovering from climate-induced disasters that happened 4-5 years ago. And now they have been hit again by the COVID-19 pandemic and more recent disasters such as Cyclones Harold and Yasa.”

She said these trends are placing “huge challenges on Pacific governments to plan and achieve their development aspirations. It also imposes enormous pressure on government finances and systems, creating new challenges such as increased debt burdens as governments are forced to borrow every time disasters strike. “

She termed today’s launch a key stepping stone event to help the facility achieve momentum for the pledging milestone later this year.

“I know it will not be easy. Given the current global environment and uncertainties in the development finance landscape, this will be a huge challenge,” the Forum Chair Natano said in his statement to the virtual audience.

“But we believe the PRF is needed now, more than ever, to help our vulnerable Pacific communities build back better post-COVID 19 and be more resilient against recurring disasters and climatic impacts.”

He described the PRF as an example of the Pacific “coming up with a practical solution to the climate change and disaster challenges we face every year. We in the Pacific do not want to stand by and wait for the next disaster, but rather that we take proactive steps to prepare and drive solutions that we know will work in our unique context.”

The Chair told Forum High level ministers, Ambassadors and partners the timing was now to finance a ‘legacy outcome’ for funding Pacific-led responses to the climate change crisis.
“Our region faces many climate change and disaster related challenges that require our urgent attention. We don’t have the luxury of time and cannot afford to wait any longer. We must act now. Our young people and future generations are counting on us and expect us to build communities that are resilient and secure against disasters and an environment that guarantees prosperous livelihoods for their future,” said PM Natano.