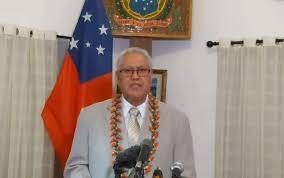 Samoans woke up to the news today that they will go back to the polls in just over two-weeks’ time, on 21 May 2021.

Calling for fresh elections was the best legal way forward for the Head of State, Tuimalealiifano Vaaletoa Sualauvi II, after he met with the leaders of the two major political parties, Tuilaepa Sailele Malielegaoi of Human Rights Protection Party (HRRP) and Fiame Mata’afa of the Fa’atuatua i le Atua Samoa ua Tasi (FAST) Party.

“Separately, a delay in forming Parliament may affect our regional and international responsibilities and effectiveness of our partnership arrangements.

“The uncertainty regarding the results of the elections has affected every fabric of our society, said the Head of State.

Samoa went to the polls on 09 April and elected 26 members each of the two parties – resulting in a deadlock and a hung government with the additional seat for women now before the Court for determination.

Some 28 petitions have been filed by candidates seeking to question the 2021 General Elections.

“Essentially, the Courts will determine the election of 29 seats of Parliament, including the additional seat for women representing more than 50% of the Membership of Parliament. The political discourse has done little to assist matters.

“Political leaders and supporters on both sides have laid serious accusations against the impartiality of the Court, lessening the appearance of that arm to discharge its constitutional and common law functions to interpret and apply our laws. Whatever the outcome of the petitions, the decisions of the Courts will be questioned and viewed through that prism, said the Head of State.

Tuimalealiifano Vaaletoa Sualauvi II said the 2021 General Elections has provided an insight into the robustness of our political system which is now in limbo.

“Of great interest is the influence from the Samoa diaspora through social media and innovative incentives. Only history will determine the extent of that influence on the 2021 General Elections, whether negatively or positively.

He said the operation of government remain uncertain given the time it will take deliberate on the court challenges.

“By June 2021, the financial year 2020/2021 will come to an end, and with it the ability of government to pay salaries of its employees, meet its expenses and pay for services- including essential services such as health and education. If the 2021/2022 budget is not tabled and passed, it will have overreaching effects on the everyday functions of Government, including its ability to respond to the Covid19 pandemic and sustain its current responses.

“Having taken into account the consideration that I have referred to above, I am of the firm belief that given the fact that there is no majority to form a Parliament, it is in the best interest of Samoa that fresh elections be called to allow our people a second opportunity to elect for itself its 17th Parliament.

“Today, by Writ, I directed the Office of the Electoral Commission to issue a Public Notice of the Writ for Election of Members of Parliament for all Constituencies and have appointed Friday 21 May 2021 as the day of Election.

“In doing so, I hereby revoke the Warrants of Appointments issued on 12 March, 16 April and 20 April 2021 in relation to the General Election held on 09 April 2021, said Tuimalealiifano Vaaletoa Sualauvi II.

Just over 128,800 eligible voters will cast their votes again to elect 52 members of Samoa’s 17th Parliament