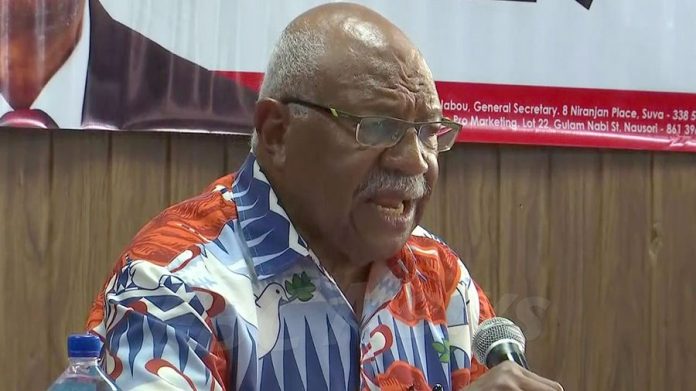 The People’s Alliance Leader Sitiveni Rabuka is denying he’s planning to carry out another coup despite calling on the Fiji military to intervene in continuing electoral process.

In a press conference Thursday, Rabuka undertook to write to the military commander on behalf of his and three other political party leaders to intervene in the vote-counting process claiming the constitution allows the military to do so.

However, the Fijian constitution has a separate mechanism to seek redress or challenge any election result.
Many citizens took to social media concerned about Rabuka’s comments and speculated whether he is planning to execute a coup.

“That he (RFMF Commander) exercise his powers given to him by the Constitution according to Section 131(2) if that is applicable. It will not be a coup, it will be just supporting the civilian system that’s running not necessarily the government.”

“Based on the actual protocol of the results and in the presence of the scrutineers or the political party agents because only that will make a credible election.”

“Focus on where it should be and not on the other areas because people of Fiji are fed up.”

“We’ve had three elections with the same kind of irregularities, if this was something new, then we would not fuss on this.”

Section 131. 2 referred by Rabuka does not make any reference to the electoral processes or management of voting or counting of votes with the assistance of the military.

There is specific mechanism under the constitution which parties can invoke to seek redress or challenge the results of any election.

The bodies which deal with electoral matters are the Supervisor of Election, the Electoral Commission and the Court of Disputed Returns.