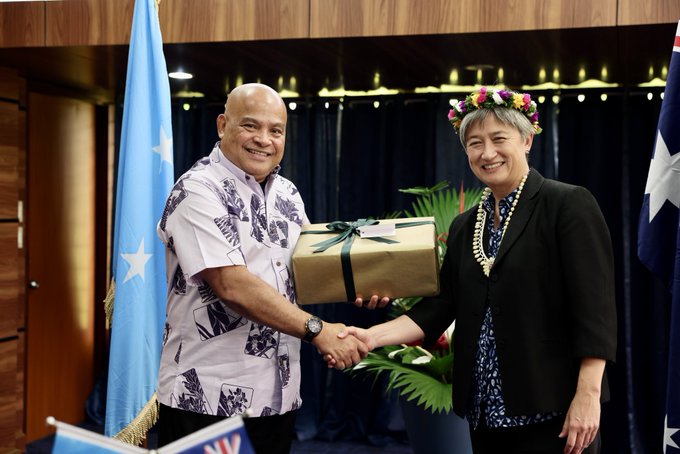 One of the Pacific’s top leaders has endorsed Australia’s newly inked security treaty with Vanuatu, warning that the Pacific “family” has to make sure outside forces do not come in and disrupt the peace and stability of our region.

Federated States of Micronesia (FSM) President David Panuelo, who played an instrumental role in thwarting China’s bid for a Pacific-wide security and economic deal in May, said countries that try to engage with the region have to respect the international rules-based order.

The stopover for the high-level bipartisan delegation to the Pacific came a day after Australia and Vanuatu struck a legally binding security treaty.

“We value the trusted Pacific partnership that we have with Australia,” Paneulo said at a joint press conference following the meeting.

“We congratulate Australia for their recent signing of the bilateral security agreement with Vanuatu because we say family first.”

Panuelo earlier this year led the opposition to Beijing’s bid for a security and economic agreement with Pacific nations, warning it was “the single most game-changing proposed agreement in the Pacific in any of our lifetimes”, because it ceded too much control to China and raised the risk of conflict.

China withdrew the agreement after a backlash.

Asked what he viewed as threats to security and stability, Panuelo said: “We co-operate with every country that is like-minded to make sure we are a country with a rule-of-law, that we preserve the rules-based international order and that we look at our systems of democracy to make sure that we represent our nation in areas of peace, security and economic co-operation.

“We have to be a nation that loves peace. And if we don’t love peace then we are not respecting the sovereignty of other nations, the human rights, the individual rights, democracy itself.

“We are a harmonious blue Pacific continent and we would say that every country that comes in to engage our Pacific family has to respect that rules-based international order.

“When we say family first, we look after each other to make sure that forces from outside don’t come in and disrupt the peace and stability of our region.”

Senator Wong praised Panuelo’s regional leadership at a time the Pacific grappled with the challenges of the “three Cs” – climate change, COVID and geostrategic contest.

“This has been a difficult time for the Pacific region. It’s been challenging and this president and this country has shown enormous leadership and we are deeply respectful of that,” she said.

“What Australia wants to do is work with our partners and friends like the Federated States of Micronesia, to navigate this period wisely, to work together to manage those challenges, to work together to drive the development and economic resilience of the people and the countries in the Pacific.”

Panuelo also expressed optimism that a rift with his fellow Micronesian nation, Kiribati, over the Pacific Islands Forum could be resolved.

Part of the concern over Kiribati’s withdrawal is the risk of it moving closer to China. China is offering to upgrade a World War II-era airstrip on an isolated island but which is close to crucial sea lanes just 3000km from the major US base at Hawaii.